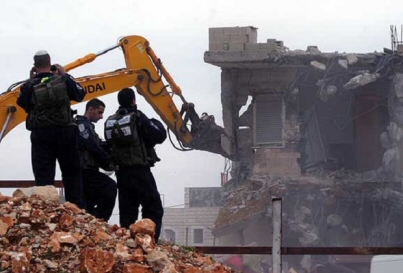 The Israeli occupation has reportedly destroyed some 478 Palestinian facilities, including homes, clinics and historical sites during 2015.A research centre affiliated to the PLO has documented the demolitions which occurred across the occupied West Bank and East Jerusalem, this year.

Abdullah al-Horani Centre for Research and Documentation said, according to Days of Palestine, that there were 247 houses among the facilities destroyed by the Israeli occupation.

According to the report, the Israeli policy of destroying houses as well as commercial, agricultural and industrial facilities, uprooting citizens from their homes and destroying farms is regarded as the “ethnic cleansing” of the Palestinians from their land.

The policy is being used by the Israeli occupation as collective punishment during the current Al-Quds Intifada.

“Destroying homes is an old/new Israeli policy that is used to empty Palestinian lands of Palestinians and replace them with [illegal Jewish] settlers,” the report noted.

The most affected areas are places of strategic importance, such as occupied Jerusalem and the Jordan Valley.