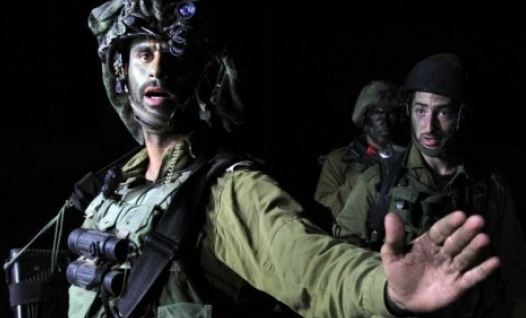 Israeli soldiers have kidnapped, overnight and at dawn Thursday, at least fourteen Palestinians in different parts of the occupied West Bank, while the army also claimed locating combat materials in Hebron.Israeli sources said the army located guns, magazines and rocket launchers in Abu Sneina neighborhood in the southern West bank city of Hebron.

The soldiers also invaded and searched many homes in Hebron city, and several nearby villages and towns, and interrogated dozens of residents.

Also in Ramallah, the soldiers kidnapped one Palestinian in al-Biereh, another in Rantis village, and a third resident in Beit Rima town.

In addition, the army installed a roadblock at the ‘Arraba junction, in the northern West Bank district of Jenin, and kidnaped Majed Nizar Atatra.

The soldiers stopped and searched dozens of cars, and interrogated the passengers while inspecting their ID cards.

The WAFA news agency said the soldiers smashed the windshield of Atatra’s car, before abducting him.

The soldiers also kidnapped Mohannad Hatem ‘Amarna, 34, from Ya’bad town, southwest of Jenin, after stopping him on a sudden roadblock on the Jenin-Nablus road.

In addition, the soldiers kidnapped one Palestinian in Bidya village, in the northern West Bank district of Qalqilia, two in al-‘Ezariyya town, east of Jerusalem, and one in the Deheishe refugee camp, south of Bethlehem.