Abbas: PLO to Decide Next Week on Israeli Security Coordination 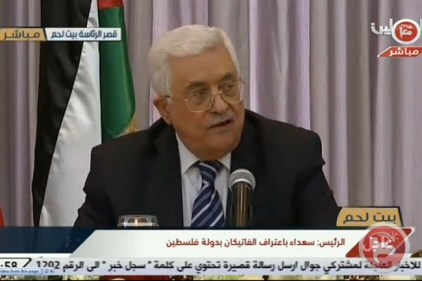 Palestinian president Mahmoud Abbas, on Wednesday, announced that the PLO would officially make a decision next week regarding the upholding of contractual relations with Israel.The president made the announcement during a speech delivered in the occupied West Bank town of Bethlehem during Orthodox Christmas celebrations.

Abbas reiterated past statements made by Palestinian political bodies supporting the end to agreements signed with Israel, notably the end of security coordination with Israel established through the Oslo Accords.
Despite threats made in September by the Palestinian president to renege from the agreements, moves have yet to be made to cut coordination with his Israeli counterparts, according to Ma’an.

“The Executive Committee and the Central Committee of the PLO as well as commanders of Palestinian Authority security services will hold meetings next week to give the final decision and we will adhere with whatever they decide,” Abbas said Wednesday.

The president also said that as the international community has convened to address conflicts in Syria and Libya, it should also convene to solve the problems of the Palestinians, adding that the status quo maintained since Israel’s military occupation began in 1967 must end.

“The Palestinian leadership won’t allow the status quo to continue,” Abbas said, calling for the removal of all settlements established in the occupied West Bank since 1967.

Abbas rejected that the PA was facing imminent collapse, in response to ongoing recent talks by Israeli leadership regarding the pressing possibility that the body could soon dissolve due to a wave of unrest, Palestine’s economic crisis, and a political crisis in the Palestinian leadership.

“The PA is one of our accomplishments and let nobody dream of its collapse,” Abbas said.

According to the PNN, Abbas stressed during his speech that “the PA will only be replaced by a Palestinian state, and no one should dream that it will collapse. The Palestinian Authority is one of our achievements and we won’t give it up.”

“We won’t accept any other scenarios,” he said, referring to reports that the Israeli government had recently discussed various scenarios that could emerge in the aftermath of the collapse of the PA.

The president’s remarks come despite comments made by PLO Central Council member Muhammad Shtayyeh last month cautioning that the PA will face “extreme difficulty” in surviving the current situation for much longer.
Shtayyeh asked: “If Israel is intending to kill teenagers everyday, who have a lack of means for living…with all of the aggression that Israel is employing, how long can the Palestinian leadership maintain this reality?”

For their part, Israeli security officials said the Palestinian Authority has made a “significant change for the better” in addressing violence in the occupied West Bank, Israeli media reported.

Officials of Israeli security agencies said that security coordination between in the PA and Israel had been “exceptionally good” in recent weeks, the daily added, citing armed presence of PA forces at locations that have been deployed at “points of conflict” between demonstrators and Israeli forces.

Such locations include Rachel’s Tomb in Bethlehem and the northern exit of Ramallah, where PA security forces have held continuous armed presence, at times preventing demonstrators from clashing with the Israeli military, Haaretz said.

The reports come as frustration has mounted among the Palestinian populace with Palestinian leadership, particularly with members of the PA who have maintained a relative quiet through recent turmoil.

The PA has worked in cooperation with Israel since its establishment during the Oslo Accords, and ongoing security cooperation has led many to accuse Palestinian leadership of enabling the continuation of Israel’s military occupation, most recently accusing the PA of preventing a sustained uprising among the Palestinian public.

PA security forces have prevented demonstrators from reaching a military post by the illegal Beit El settlement near Ramallah on a near-weekly basis over the past month.

Last week, PA forces stopped hundreds of protesters from continuing their march to the Israeli checkpoint by setting up flying checkpoints and blockades.

Israel’s security cabinet has reportedly met several times in the past weeks to discuss the potential collapse of the PA amid recent unrest, Palestine’s economic crisis, and a political crisis among Palestinian leadership.
The PA Ministry of Foreign Affairs earlier this week accused Israeli Prime Minister Benjamin Netanyahu of ‘plotting’ against the PA after he suggested its collapse may be imminent.

The PM urged the Israeli security cabinet to prevent the collapse of the PA, while preparing for its potential dissolution which would require Israeli forces to take full responsibility for both civilian and security affairs in the occupied West Bank.