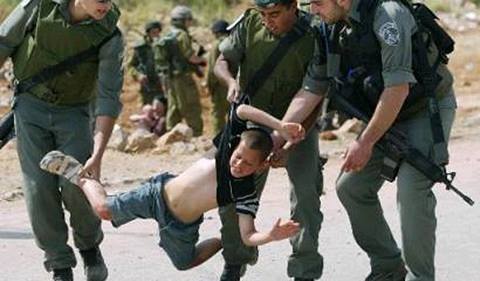 The Palestinian Detainees’ Committee has reported that recent testimonies from child detainees, held by Israel, revealed they have been subject to torture and abuse during their abduction, and interrogation. The Committee said such ongoing Israeli violations aren’t new, but a systematic policy that violates International Law, the Fourth Geneva Convention and all related international treaties, especially regarding children.

It said the International Community’s failure to end the grave Israeli violations and crimes encourages Israel to continue illegal policies with impunity.

Hiba Masalha, one of the lawyers of the Detainees’ Committee, said it managed to visit child detainees in Majeddo Israeli prison, were 97 Palestinian children (under the age of 16) are held in section three.

Masalha said all the children in that section were tortured, beaten and emotionally abused during their arrest, and during interrogation, in addition to being held under harsh conditions.

She also stated that one of the children, Mohammad ‘Aahed Shweiki, 15, from the northern West Bank city of Qalqilia, was repeatedly beaten all over his body when the soldiers kidnapped him, and tied him with plastic cuffs.

The child was verbally, physically and emotionally abused when he was kidnapped on October 30, 2015, and after he was sent to an interrogation center. He was beaten, cuffed and blindfolded, while the soldiers frequently struck him, with their guns and batons on his head, back, shoulders and legs.

He was also stripped-searched in Majeddo prison, while the soldiers continued to insult and beat him.

Another detained child, identified as Laith Jamal al-Husseini, 16, from Shu’fat occupied Jerusalem, was kidnapped after the soldiers stormed his family home, and ransacked it, in addition to the military dogs that ravaged through the furniture and terrified him and his family.

He said he was awakened by the loud shouts of the soldiers as they stormed the family home, and was cuffed and blindfolded before the soldiers took him to a military interrogation center.

The child lost consciousness after the soldiers repeatedly struck him on the head, and was later strip-searched in Majeddo prison.

In a recent report, the Palestinian Detainees’ Committee said the soldiers have kidnapped, in 2015, 6830 Palestinians; almost %100 of them were subject to various forms of physical and psychological torture and abuse in direct violation of International Law.

It said that the soldiers have kidnapped 4075 Palestinians in the West Bank, including 2353 in occupied Jerusalem.

Among the kidnapped Palestinians are 2179 children, between the ages of 11 and 18, in addition to 225 women.
Approximately 540 Palestinian detainees are held under arbitrary Administrative Detention orders, without charges of trial.