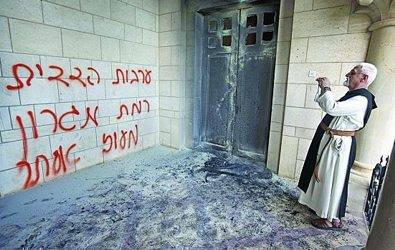 “We strongly condemn the vandalization of the Dormition Abbey in Jerusalem. Such an act is the direct result of a hate culture generated by racism and the occupation with impunity, exceptionalism and entitlement. The international community is responsible to protect both Palestinian holy sites and people from such Israeli sectarian attacks and to put an end to such lawlessness in Israel.” ~Hanan AshrawiPLO Executive Committee Member Dr. Hanan Ashrawi made these comments during a meeting with a visiting delegation representing the interfaith Tree of Life Educational Fund, at the PLO Headquarters in Ramallah.

Dr. Ashrawi provided an assessment of the deteriorating conditions and escalating occupation violence on the ground, and she discussed Israel’s continued breach of international law and conventions, including its illegal settlement activities, settler violence and terrorism, extra-judicial killings, the withholding of Palestinian remains, and home demolitions, among other violations.

In that context, she stressed, according to the PNN: “The chances for peace are being willfully destroyed and systematically dismantled by Israeli unilateral measures to superimpose ‘Greater Israel’ on historic Palestine. Israel is not in the least bit committed to the two-state solution, international law or the basic principles of human rights.”

Dr. Ashrawi brought attention to America’s unquestioning support of Israel and its preferential treatment that provided Israel with a legal, security and economic cover that enabled it to persist with its violations.

Dr. Ashrawi added, “Public opinion in the U.S., particularly in civil society and among academic organizations, is a promising development that must be supported and pursued in order to have an impact on American official policy.”

Current and future Palestinian moves in the international arena, including at the International Criminal Court, were also addressed.