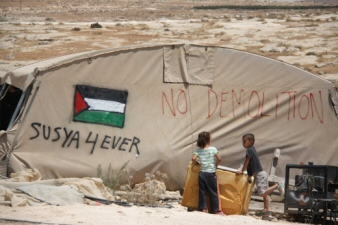 The village of Susiya has become the focus of an international campaign, attracting European diplomats, officials, the US state department and pro-Palestinian activists, after the Israeli High Court denied a Palestinian request for an injunction to stop Israel’s plans to destroy their homes in May 2014.

For years, Palestinians in Susiya have suffered under the Israeli occupation. In 1986, Israeli authorities expelled families living in Susiya, after nearby ruins were declared a ‘national archaeological park’.

Following their expulsion, the families settled on their land, located between the site and the Israeli settlement of Susiya until 2001, when the Israeli army returned to destroy their homes and wells, and drive them out, once again.

They appealed to the Israeli High Court, which gave them a temporary injunction order allowing them to return to their land.

After the order was annulled in 2007, Susiya families appealed to the High Court to claim their rights.