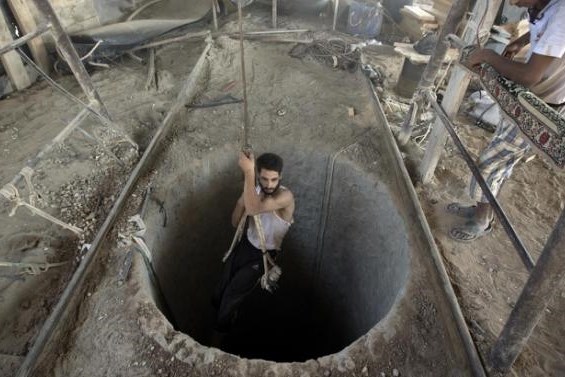 A Hamas-affiliated militant died on Saturday, after a tunnel collapsed west of the city of Khan Younis, in the southern Gaza Strip, medical and local sources in Gaza said.Gaza’s Ministry of Health spokesman Ashraf al-Qidra identified the victim as Ahmad Ashour al-Najjar, 26.
Locals said that the tunnel was used for “resistance,” and Hamas’ military wing, the Izz al-Din al-Qassam Brigades, confirmed in a statement that al-Najjar was a member of the group.

Another member of the group, 29-year-old Abdul-Rahman al-Mobasher, was killed last month in a tunnel collapse in the same area.

A number of Palestinians in Gaza have been killed in the vast tunnel networks that lie below the besieged enclave, which are largely used for smuggling in the coastal enclave’s south and military purposes in the north.
The Hamas movement which governs the strip is reportedly reconstructing a vast tunnel network intended to be used for carrying out attacks on Israeli military targets and civilians, swathes of which were destroyed during Israel’s brutal offensive on Gaza in 2014.

While the tunnels are used by Hamas as a source of tax revenue and inflow of weapons from the south, they also supply highly-demanded necessities for Gazans including food, medicine, and much-needed infrastructure materials.

The Institute for Palestine Studies reported in 2012 that Hamas authorities had counted 160 deaths inside the tunnels since the Israeli blockade began in 2007, and in August of 2014, al-Jazeera reported that figure to be as high as 400.

Opinion/Analysis: A Decade of Siege on Gaza