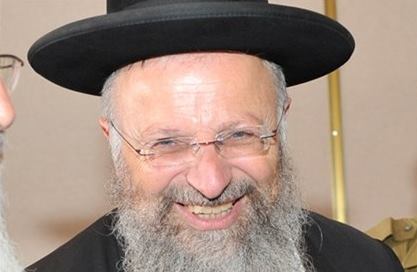 Chief Israeli Rabbi Shmuel Eliyahu announced Tuesday, on Facebook, that Palestinians should be executed in order to establish safety in Israel.“Israeli army has to stop arresting Palestinians,” he posted on his Facebook wall, “but, it must execute them and leave no one alive.”

According to the PNN, Eliyahu is well known for his racist behavior and controversial statements about Arabs and Muslims. He has been calling on the government to carry out state-sanctioned revenge against Arabs in order to, in his words, ‘restore Israel’s deterrence.’

The hard-right wing and bloodthirsty Chief Rabbi of Safed, and also a member of the Chief Rabbinate Council additionally declared that the Palestinians are the enemy of the Israeli occupation state and they “must be destroyed and crushed in order to end violence.”

In 2012, Eliyahu was charged for racist statements. Among these were, according to Israel national news: “The Arab culture is very cruel,” and “The Arabs behave according to different codes, and violent norms that have turned into ideology.”

The rabbi allegedly stated that examples of this new Arab “ideology” now include stealing farm equipment from Jews and blackmailing farmers for protection against thefts. He also supposedly said that “the minute you make room for Arabs among Jews, it takes five minutes before they start to do whatever they want.” The justice ministry dropped the charges because the statements ‘may’ have been altered by reporters.

The Jerusalem Post reported him saying: “Should we leave them alive in order to then free them in another gesture to Palestinian Authority President Mahmoud Abbas? The fact that they still have a desire to commit terrorist attacks shows that we are not operating strongly enough,” he said.

Explaining more about his fatwa, Eliyahu wrote, on his facebook, page that “the Israel Police officers who do keep terrorist Palestinians alive should be prosecuted under the law.”

He went on: “We must not allow a Palestinian to survive after he was arrested. If you leave him alive, there is a fear that he will be released and kill other people.” He added: “We must eradicate this evil from within our midst.”