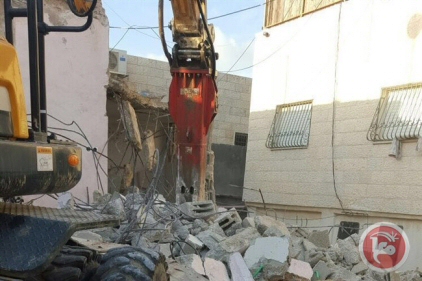 A Palestinian family in the occupied East Jerusalem village of Sur Bahir, on Friday, demolished their own home following an order by an Israeli court.Khalil Dabash, owner of the home, told Ma’an that a Jerusalem municipal court ordered the demolition on the grounds that it was built without proper permits.

The court said that the family would be charged for the demolition of their home if it was not demolished before Sunday.

Dabash is among many Palestinian residents of occupied East Jerusalem who are forced to demolish their own homes in order to avoid paying the municipality high fees to carry out the demolitions.
Dabash said that his mother Jamila had built the house around 20 years ago and that the family had paid fines to the Jerusalem municipality several times before. The self-demolition left Dabash’s sister homeless.

Thirty-three percent of all Palestinian homes in the occupied city lack Israeli-issued building permits, potentially placing at least 93,100 residents at risk of displacement, the United Nations reported in 2012.

According to rights group Association for Civil Rights in Israel, the Israeli government issues building permits in line with discriminatory state policy enacted to increase the Jewish population, while neglecting local Palestinians.

Only 14 percent of East Jerusalem land is zoned for Palestinian residential construction, while one-third of Palestinian land has been confiscated since 1967 to build illegal Jewish-only settlements, ACRI says.

At least 20 Palestinian-owned structures in the occupied Palestinian territory have been demolished in the first few weeks of this year alone, after the demolition of over 500 during 2015, displacing over 600 Palestinians.