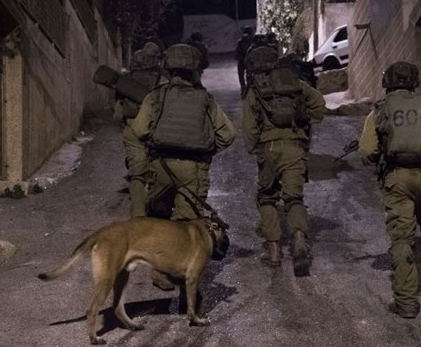 The soldiers also invaded the northern West Bank district of Nablus, and kidnapped Riyadh Fares Abu al-Hasan, and Ala’ Oweiss, while Fadi Nidal Abu Saud was taken prisoner in the al-Karama border terminal on his way back home from Jordan.

In occupied Jerusalem, the soldiers searched many homes in the al-‘Isawiyya town, and kidnapped Hamada Mohammad Hreiz and Mahmoud ‘Awni ‘Ateyya.

In related news, the soldiers assaulted four Palestinians after they were released from detention, near the Salem military base, west of Jenin.

The Palestinian Detainees Committee said the soldiers assaulted Ahmad Mo’men Abu Zeid, 23, and Mohammad Odah, 18, directly after releasing them from the detention in the military base.

On Sunday evening, the soldiers assaulted two detainees, from Hebron, directly after releasing them from the same military base.

Army Detains Several Palestinians from the West Bank, including a Former Prisoners