Soldiers Kidnap Then Release A Young Woman In Jerusalem 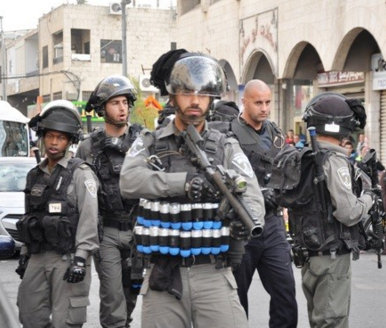 The Israeli Police released, Sunday, a young Palestinian woman after kidnapping her under the allegation that she “carried a knife.” She was held in a Police Station in the Chain Gate, in occupied Jerusalem.The Wadi Hilweh Information Center in Silwan (Silwanic) has reported that the soldiers kidnapped Fatima Abu Sneina, while walking near Bab an-Nather, one of the gates of the al-Aqsa Mosque.

Fatima said the soldiers stopped her while she was waiting for her brother, searched her under the rain and the cold, then abducted her and took her to the police station.

The police later released her without even interrogating her, and without any conditions or bail.

She added that she was surprised to learn, after her release, that an Israeli security officer, phoned her father, and told him she was being held under interrogation, ‘after the soldiers searched her and found a knife in her possession.’

Also on Sunday, the District Court in Jerusalem released two detained children from Jerusalem, identified as Majd Sa’id Abu Khdeir, 14, and Ala’ Abu Khdeir, 14, after ordering them under house arrest outside of the city, and forcing their families to pay fines.

The two children were taken prisoner a few days earlier, after the army claimed they hurled stones on the Light Rail.