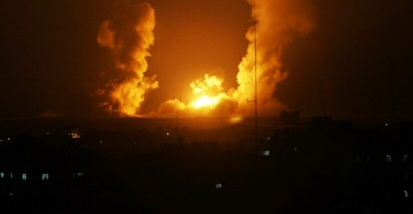 Israeli warplanes, predawn Monday, launched multiple airstrikes targeting different locations in the southern Gaza Strip, in yet another act of aggression against the besieged enclave, local sources said.WAFA correspondence said that an F16 warplane targeted an empty land and the Israeli ex-settlement area to the southwest of Khan Younis, with at least two missiles, causing destruction and a large hole in the said areas.

Israeli warplanes targeted another location to the south of Deir al Balah in the center of the strip, causing destruction and spreading fear and panic among Palestinians living nearby.

There were no reports of casualties.

According to Haaretz, a rocket allegedly hit Israel’s southern settlements and exploded near the border with the Gaza in an open area, Sunday night, causing no damages.

Israel continues to breach the truce agreement reached between Israel and Palestinian armed groups in Gaza on August 26th, 2014, following 51 days of bloody aggression on the strip, which claimed the lives of about 2,200 Palestinians, and left more than 10,000 others injured. Hundreds of thousands others are currently displaced and live in makeshift caravans or in UNRWA-run schools.

Since 2007, Israel has imposed a blockade on Gaza, which has caused a serious decline in the standard of living, poverty and unprecedented levels of unemployment.