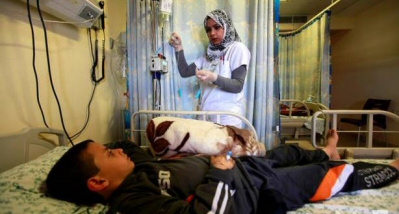 Israeli Major General and coordinator of Israeli government activities in the Occupied Palestinian territories, Yoav Mordechai, admitted that his government prevents cancer patients in Gaza from receiving treatment.Earlier this week, Israel imposed a travel ban for patients through the Beit Hanoun (Erez) crossing, in the north of the Strip. Israel has given no reason for the ban on patients who were previously allowed to enter Israel on medical grounds.

Mordechai said, in an interview with the Palestinian daily news paper Al-Quds, that his government has its excuses for such policies. Reportedly, he claimed that the patients from are commissioned, by Hamas, to “sabotage” the Israeli economy.

Soha Hussein, a wife of 53-year old cancer patient from Gaza, emphasized in an interview with Days of Palestine: “My husband is too sick to be able to serve himself. How can you imagine he would be able to leave the hospital and collect intelligence information?”

But Yoav Mordechai is of a different opinion. “Hamas’ cynical exploitation of Israeli entry permits is forcing Israel to think twice before it issues permits to Gazans,” he said, warning that the Israeli authorities to “close the Strip and completely prevent travel of Gazans from the Strip.”

However, the Israeli state has been placing a strict siege on the Gaza Strip since 2006.

The sit-in was organized by the Aid and Hope Program in front of the Ministry of Civil Affairs in Gaza, PNN firther reports. The group provides aid and support for cancer patients in the Palestinian enclave.

“Our message is to demand a clear explanation over the travel ban imposed on women cancer patients in the Gaza Strip,” said Eman Shanan, the general director of the AHP program in Gaza, according to teleSUR.

“These women have been receiving treatment for years. Our second message is directed to the Ministry of Health, that they must insure the required treatment for them, in case this travel ban continues,” Shanan added.

As a cancer survivor herself, Shanan added that the United Nations’ World Health Organization should take the necessary measures to save the lives of these women:

“This is clearly a premeditated death sentence by Israel,” she warned.

According to the Gaza Health Ministry, there are more than 14,600 cancer patients in the Gaza Strip. The AHP also says that 30 percent of them have been able to receive medical treatment in Israeli hospitals.

Many of the hospitals in Gaza simply cannot provide the optimized treatment for cancer, as a result of Israeli attacks on hospitals and extremely limited access to medical supplies. At the same time, according to an interview with Dr. Hamdan in Al-Akhbar, “Patients in Gaza have no access to the medication they desperately need for their treatment. Even under normal circumstances, there are 45 kinds of cancer treatments that are not available in Gaza. Not to mention that from time to time, the Ministry of Health in Gaza declares acute shortages of medecine.” And, on top of this, there are only four doctors available for nearly 15.000 cancer patients.

Israel has, in the past, used cancer-inducing bombs such as Dense Inert Metal Explosive, known as DIME (linked images extremely graphic), in addition to depleted uranium charges. According to nuclear data, people living in the dispersal zone are expected to acquire cancers, birth defects , still births, and other known, unknown or untraceable and undiagnosable diseases.