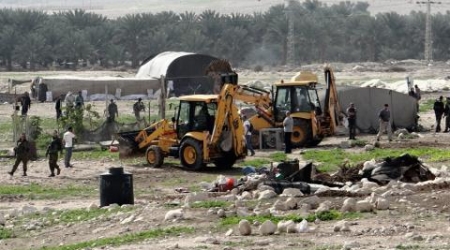 Israeli authorities notified Palestinian Bedouin families, on Thursday, of the planned demolition of their houses, giving them a deadline of February 1st to evacuate the structures.The structures are situated between the occupied West Bank cities of Nablus and Ramallah, according to Al Ray.

Suleiman El-Zawahra, a Palestinian citizen, said that the families were told evacuate the structures, stressing that the demolition process targets more than 30 facilities which are used for housing and ranching.

In an interview with Quds Press Service, El-Zawahra noted that the structures belong to a number of Palestinian Bedouin families, and are inhabited by around 80 individuals.

He explained that Israeli authorities have declared the region a “closed military zone” which means building and residing there are prohibited. He stressed that the Bedouin families have been living there for nearly 30 years.

El-Zawahra explained that the families were told to evacuate the area years ago, but filed a petition against the decision. The court recently rejected the appeal.

He pointed out that the families do not have any alternative accommodation.

Israeli authorities continue to demolish many Palestinian Bedouin villages in the West Bank and East Jerusalem in order to expand Israeli settlements.