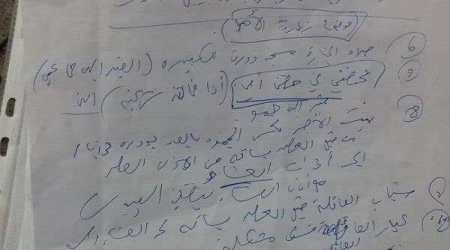 His handwriting reflects his deteriorating health, as the words can hardly be read.

In his testament, he hopes to see his wife and children, and he asked to be laid to rest in his mother tomb.

Muhammad, a 33-year-old husband and father of two small children, was taken by Israeli forces inside his Ramallah home, at 2:00 a.m. on Nov. 21. According to the Ramallah-based Addameer Prisoner Support and Human Rights Association, Al-Qeeq was tortured and ‘forced to sit in stress positions on the interrogation chair, with his hands shackled behind his back.”

Like 660 other administrative detainees held by Israel at the end of December, Al-Qeeq has no access to the charges against him, which are kept in classified files by Israeli forces.