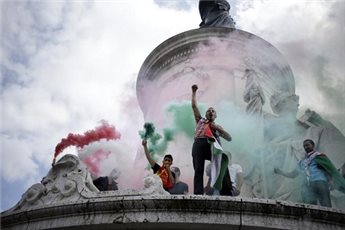 A Palestinian Liberation Organization (PLO) official, Saturday, welcomed a recent French bid to revive the deadlocked Middle East peace process and bring about the two-state solution.PLO Secretary-General Sa’eb Erekat stated in a press release that he welcomed “the call made by France for an inclusive and serious international involvement towards ending the Israeli occupation that began in 1967 and the full realization of a free, independent and sovereign State of Palestine on the 1967 borders.”

According to WAFA Palestinian News & Info Agency, France has announced plans to convene an international peace conference in order to break the deadlocked Palestinian-Israeli peace process and bring about the two-state solution.

French Foreign Minister Laurent Fabius announced on Friday that his country would recognize a Palestinian state within weeks, if the bid to break the deadlock fails.

‘In the coming weeks, France will take… steps in order to organise an international conference gathering each of the parties’ principle partners — principally Americans, Europeans and Arabs — in order to preserve and to bring about the two-state solution,’ Fabius was quoted by AFP as saying.

Fabius made it clear that if “the last-ditch attempt at reaching a negotiated solution hits a stumbling block” fails, his country would unilaterally recognize the Palestinian state.

“In that case, we will have to live up to our responsibilities and recognise a Palestinian state,” he said.

“We must not allow the two-state solution to fall apart,” AFP quoted and reported on Fabius, noting that there had been no halt to Israeli settlement activity on land the Palestinians see as the foundation of their future state.

Reiterating Palestinian leadership’s support for such a conference, Erekat added: “We have been calling upon the international community to have an international conference for Palestine based on international law and UN resolutions, with the parties implementing their obligations under signed agreements; including a full cessation of Israeli settlement activities within a specified timeframe and terms of reference.”

Erekat added that he would be contracting France as well as other international partners to advance in that direction.

In June 2015, France pushed for the resumption of peace talks and advocated a UN Security Council resolution that would set the parameters for peace talks and bring the Israeli occupation to an end.

During his efforts, Fabius warned that continued Israeli settlement construction across the occupied West Bank is damaging the chances of a final deal.

“The only way to reach an agreement is through bilateral negotiations, and we will forcibly reject any attempts to force upon us international dictates,” Netanyahu said.

In March 2015, shortly before his re-election, Netanyahu said that he would not allow a Palestinian state, if re-elected, effectively reneging on his 2009 endorsement of a two-state solution.

Netanyahu also vowed, in recent days, that he would never allow the Palestinian people to have East Jerusalem as their future capital and pledged to build “thousands” of settler units across the city.

Fabius’ June 2015 efforts came about a year after US-sponsored negotiations failed in April of 2014.

Palestinian leadership had said that the process failed after Israel reneged on its commitments to halt settlement construction and release the veteran pre-Oslo Palestinian detainees.