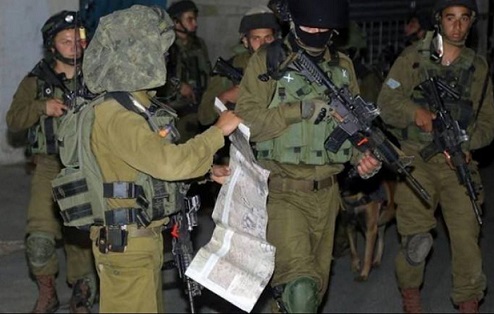 In addition, dozens of soldiers invaded the northern West Bank city of Tulkarem, broke into and ransacked many homes, and kidnapped four Palestinians, from various neighborhoods.

The soldiers also stormed and searched homes in the southern West Bank city of Hebron, and kidnapped Ali Abdul-Ghaffar Dofash and Saddam al-Ja’bari, after searching their homes.

Two more Palestinians, identified as Mohammad Qassem Masalma, 17, Jibreel Hasan Masalma, 16, have been kidnapped from their families’ homes, in Beit ‘Awwa town, southwest of Hebron, while Odai Samir Masalma, 18, was summoned for interrogation in the Etzion military base.

The army invaded several neighborhoods in Hebron city, installed roadblocks on the main roads leading to Beit ‘Awwa, Sa’ir and Halhoul towns, Hebron’s northern and southern entrances, before stopping and searching dozens of cars, and interrogated many Palestinians while inspecting their ID cards.

|Army Kills A Palestinian Near Tulkarem|

On Sunday evening, the soldiers kidnapped a young Palestinian man in Sanour village, south of the northern West Bank city of Jenin, after stopping him on a sudden roadblock.

It is worth mentioning that the soldiers have kidnapped, overnight, sixteen Palestinians in various parts of the occupied West Bank, including Nablus, Ramallah, Hebron and Bethlehem.

Also, the army released Fathiyya Khanfar, 60, from al-Atatra village, south of Jenin. The Palestinian woman was kidnapped eleven months ago while visiting her imprisoned son.