Army Kills A Palestinian Near Tulkarem 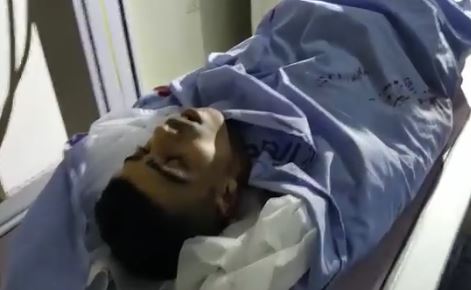 Head of the Tulkarem office of the Red Crescent Raed Yassin said the medics were informed, approximately at 7:15 in the morning, that a young man was injured near the Jabara Gate, south of Tulkarem.

The medics rushed to the scene to find an Israeli ambulance holding the body of Ahmad Hasan Toba, 19, before handing him to the Palestinian side.

Yassin said initial examination revealed that the slain Palestinian teen suffered five gunshot wounds in his neck, chest and back.

Israeli sources claimed the young Palestinian ‘crossed the Wall into lands of the Sal’it settlement,’ illegally built on Palestinian lands near Tulkarem, and that the soldiers rushed to the scene, and conducted searches.

The soldiers then located the Palestinian teenager reportedly in the bushes, and ‘tried to approach him,’ to arrest him, but he ‘pulled a knife and the soldiers shot him dead,’ according to Israeli Ynet News said.

His father said Ahmad usually works in constructions whenever he has a chance.

The Israel army transferred the body of the slain teen to the Palestinian side.

On Sunday evening, Israeli soldiers kidnapped a young Palestinian man in Sanour village, south of the northern West Bank city of Jenin, after stopping him on a sudden roadblock.

The kidnapped Palestinian has been identified as Fadi Najeh Abu Ali, 21; he was heading back home.

It is worth mentioning that the soldiers have kidnapped sixteen Palestinians, overnight, in various parts of the occupied West Bank, including Nablus, Ramallah, Hebron and Bethlehem.