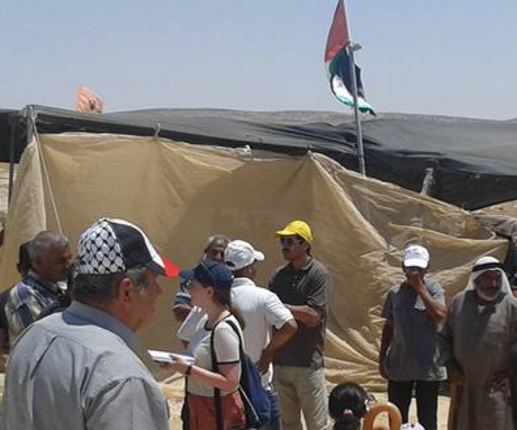 Israeli soldiers demolished, on Thursday evening, two residential tents in the Susiya village, southeast of Yatta town, in the southern West Bank district of Hebron, and confiscated them. The soldiers also shot and injured one Palestinian, east of Bethlehem.Head of the Susiya Village Council Jihad Nawaj’a, said several army vehicles invaded the village, and demolished the two tents which belong to Nasser Ahmad Shreiteh and his four family members.

He added that international rights groups granted the two tents to the family several months ago, to provide them with shelter.

Nawaj’a strongly denounced the Israeli attack, the ongoing demolitions and removal of dozens of tents, structures, homes, sheds and wells owned by the Palestinians in Susiya and Masafer Yatta areas, and described the attacks as acts of vengeance and outrageous discrimination.

He further stated that Israel aims at removing the Palestinians from the area in order to replace their homes and dwellings with illegal colonies.

In addition, the soldiers shot injured a young Palestinian man in Teqoua’ town, east of Bethlehem, after several Israeli military vehicles invaded it.

The soldiers fired several live rounds, gas bombs and concussion grenades; the young Palestinian was shot with a live round in his thigh, and was moved to the local clinic.