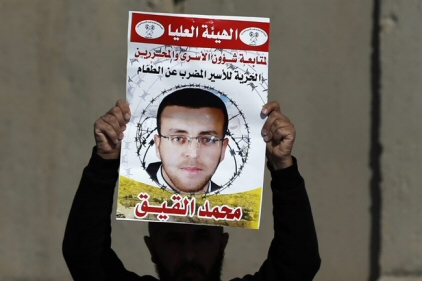 However, he stressed that the sentence had not been overturned and that al-Qeeq was likely to remain on hunger strike.

‘It’s a bad decision,’ Fares said. ‘I don’t believe he will accept it.’
He said he believed al-Qeeq might use the opportunity to accept medical treatment while seeking a more acceptable solution.

Al-Qeeq has said that he will continue his hunger strike until ‘martyrdom or freedom.’

The 33-year-old hunger strikes to protest the controversial and archaic practice, including Khader Adnan and Mohammad Allan, as of last year, who were both close to death by the time Israel agreed to their release.

In recent days, a number of international bodies, including the UN and the European Union, have expressed concern over al-Qeeq’s situation, as well as Israel’s use of administrative detention for some 660 Palestinian prisoners.

On Wednesday, UN official Robert Piper condemned the ‘arbitrary nature of his detention,’ saying: ‘I reiterate the United Nations’ long-standing position that all administrative detainees — Palestinian or Israeli — should be charged or released without delay.’

The Palestinian Prisoners Society has said that Israel’s security establishment has, so far, shown little willingness to negotiate al-Qeeq’s release.

During previous hunger strikes, Israel authorities feared that prisoner deaths might spark unrest in the occupied territory. But, unrest has already shaken the territory for months while, last week, Fares said that the security establishment now believes it has ‘nothing to lose.’

Allan continued his hunger strike following that decision, and he only agreed to end the protest when Israel promised not to renew his administrative detention.