Netanyahu to Fence Off All Occupied Lands 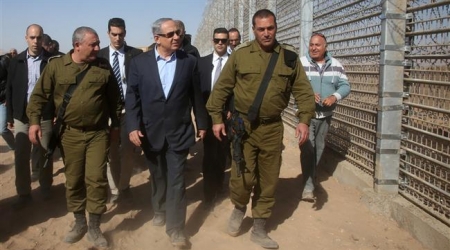 Israeli Prime Minister Benjamin Netanyahu has hinted that a reinforced fence may be set up around the entirety of the occupied territories, a fence which is similar to the one it is currently building on the territories bordering Jordan.Netanyahu visited the fence that is under construction on Tuesday, when he said, “At the end of the day,… there will be a fence like this one surrounding its (the occupied territories’) entirety,” The Times of Israel reported.

Israel came into existence in 1948, when it occupied Palestinian land along with vast expanses of other Arab territories during full-fledged military operations. The occupied lands also include Lebanon’s Shebaa Farms and Syria’s Golan Heights.

In 1967, it occupied and later annexed the Palestinian territories of the West Bank and East al-Quds (Jerusalem) in a move never recognized by the international community. Tel Aviv withdrew from the Palestinian enclave of the Gaza Strip in 2005, but has been keeping the territory under a crippling siege and regular deadly offensives.

Upon completion, the fence would close off all the occupied territories from non-occupied land, namely Gaza, as well as sovereign territories.

Trying to justify the move, the Israeli premier said, according to Press TV/Al Ray: “In our neighborhood, we need to protect ourselves from the carnivorous animals.”