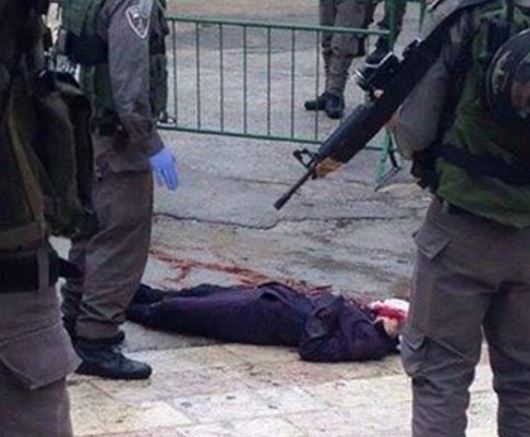 Israeli Soldiers shot and killed, on Saturday, a young Palestinian woman, 18 years of age, near the Ibrahimi Mosque, in the southern West Bank city of Hebron. The army claimed she attempted to stab a soldier. The slain young woman has been identified as Kilzar Mohammad Abdul-Halim al-‘Oweiwy, 18 years of age, from Hebron.

Eyewitnesses said the fatal shooting took place near Bab al-Khan, in the as-Sahla area, close to the Ibrahimi Mosque, in Hebron, and that she was shot with several rounds of live ammunition.

Israeli sources claimed that the soldiers approached the woman after suspecting her, and wanted to search her, “but she pulled a knife and attempted to stab them,” before they shot and killed her; no soldiers were injured in the reported incident.

According to Israeli Ynet News, after the girl attacked the soldiers and was pushed back, she accidentally stabbed a Palestinian, 52, before the soldiers shot her dead.

The man was moved to the Shaare Zedek Israeli Medical Center, in Jerusalem.

Meanwhile Israeli TV Channel 2 said the Palestinian, identified as Abed Rajabi, 52, was trying to catch the girl “after she attacked the soldiers.”

Eyewitness told Maan news that the man “was trying to protect her, and prevent the soldiers from killing her,” but they shot him.

The Israeli army closed the entire area after the incident, and declared it a closed military zone.