Palestinian Woman Delayed Passage Out of Nahhalin While in Labor 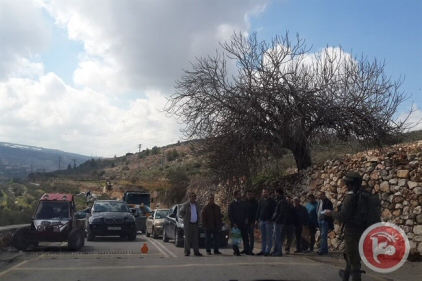 Israeli military forces, on Friday, delayed passage for a Palestinian woman in labor out of the Bethlehem-area town of Nahhalin, as the army continued to seal the town following an attack on an Israeli settler, earlier this week.Nahhalin resident Sheikh Mohammad Shakarneh told Ma’an News Agency that the pregnant woman, after going into labor, attempted to cross a military checkpoint out of the West Bank village to a local hospital.

Israeli forces stationed at the checkpoint refused to allow the woman to continue unless she was taken in an ambulance, and she was forced to wait, Shakarneh said.

Palestinians in the occupied West Bank frequently take private cars to hospitals instead of waiting a potentially long duration of time for an ambulances to arrive.

Clashes continued Saturday, between Nahhalin residents and the Israeli military, which sealed all entrances to the town on Tuesday night, after an Israeli settler was stabbed and wounded while jogging outside the nearby illegal settlement of Neve Daniel.

Sharkarneh said that conditions for the town’s 7,000 residents had continued to worsen, and that Israeli soldiers have threatened to increase already harsh restrictions on the community.

“They [Israeli soldiers] have been raiding the village, going through streets firing tear-gas bombs at houses, and dispersing any gatherings inside the village,” Shakarneh said.

Sharkarneh added that drones had been flying above Nahhalin all day on Friday.

Locals said, earlier this week, that the military sealed village roads with mounds of earth and buildings under construction were being used to barracks soldiers.

Food suppliers who distribute to the town’s stores everyday have reportedly been denied entry, and hundreds of workers have been unable to reach their workplaces, including teachers that work at nearby universities.

An Israeli army spokesperson confirmed, on Saturday, that no changes had been made in regards to closures of Nahhalin.

Following the closure, the spokesperson that ‘security measures’ had been enforced around the town ‘as part of the search for the suspect’ who carried out the stab attack on the Israeli settler, adding that all movement in and out of the town was prohibited with the exception of humanitarian cases.

Israeli military commanders are authorized to independently implement total closures of Palestinian areas while searching for suspected attackers, but the measure has been considered by critics as wide-scale collective punishment.

While the military has frequently sealed villages and cities in areas nearby an attack or hometown of the attacker, locals have also reported closures following clashes between residents and forces, as well as arbitrary closure to prevent Palestinians from roads used by Israelis and settlers.