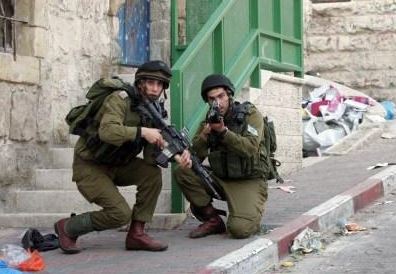 Dozens of Israeli soldiers invaded, on Sunday at dawn, the southern West Bank district of Hebron, searched homes and kidnapped two Palestinians, while a third Palestinian was kidnapped on the Container roadblock, south of Jerusalem.Several Israeli military vehicles invaded Hebron city, searched a few homes, and kidnapped a veterinarian, identified as Mohammad Tareq Tamimi, 29, before taking him to an unknown destination.

In addition, soldiers stationed on the Container roadblock have kidnapped a young man, identified as Sharif Zoheir al-Ja’ba, 26, from Hebron, while heading to the al-Karama Border Terminal, on his way to Jordan.

The soldiers also summoned Majed al-Haymouni for interrogation in the Gosh Etzion military and security base, north of Jerusalem.

In related news, the soldiers invaded the towns of ath-Thaheriyya, Sammoa’ and Ethna, in the Hebron district, and installed a roadblock on the main entrance of the al-Fawwar refugee camp, south of Hebron, stopped and searched dozens of cars, and examined the ID cards of many Palestinians.