Army Kidnaps Five Palestinians In Hebron, One In Salfit 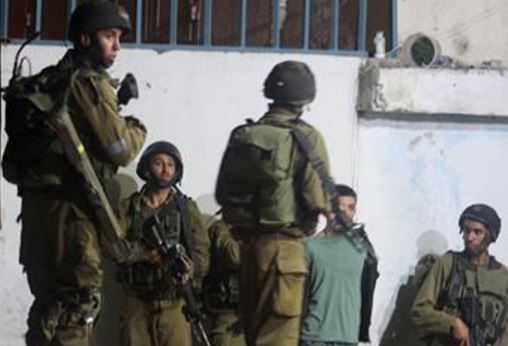 The soldiers also kidnapped the former local Imam, identified as Mohammad Ahmad ‘Aadi, 57, who suffers from various chronic health issues, and summoned his son Aseed, 25, for interrogation in the Etzion military base. Aseed is a former political prisoner.

It is worth mentioning that the soldiers also installed roadblocks on the main roads of Sa’ir and Halhoul towns, in addition to Hebron’s northern entrance, before stopping and searching dozens of cars, and interrogated many residents while inspecting their ID cards.

Coordinator of the Popular Committee against the Wall and Settlements in southern Hebron Rateb al-Jabour, said the soldiers intend to demolish three residential sheds, two tents, and three barns, used by dozens of residents.

Jabour urged international legal and human rights groups, and local organizations, to intervene and stop the escalating Israeli violations against the residents, their homes, lands and their livelihoods.

Also on Monday at dawn, the army invaded several Palestinian communities in the West Bank districts of Bethlehem and Jenin, searched many homes, and kidnapped two Palestinians.