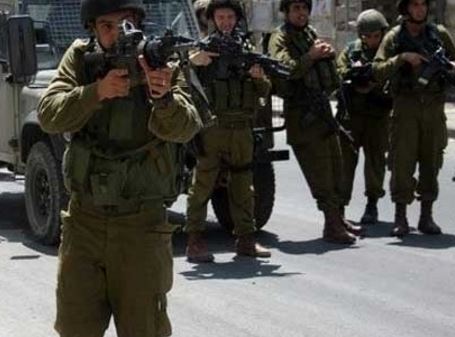 Israeli soldiers have kidnapped, Tuesday, three Palestinians in the West Bank districts of Hebron, Bethlehem and Nablus. At least seventeen Palestinians have been kidnapped in different parts of the occupied West Bank, Tuesday. Media sources in Hebron, in the southern part of the West Bank, said the soldiers invaded the Sammoa’ town, south of Hebron, and kidnapped Jibreel Ahmad al-Hawamda, 24, before taking him to the Etzion military base.

The soldiers also invaded several neighborhoods in Hebron city, in addition to the towns of Beit ‘Awwa, and Deir Samet, and installed roadblocks on the main roads, leading to Halhoul and Sa’ir towns, and Hebron’s northern entrance, before stopping and searching dozens of cars, and investigating the ID cards of the passenger.

In addition, the soldiers invaded Doha town, west of Bethlehem, searched many homes and kidnapped a young man, identified as Mohammad Monjed Khallab, 26.

In related news, Israeli soldiers stationed on the Za’tara military roadblock, south of the northern West Bank city of Nablus, stopped and searched many cars and kidnapped a young man, identified as Riyad Hashshash, in his thirties.

The soldiers also invaded several Palestinian communities in the northern West Bank district of Jenin, broke into and searched many homes, and kidnapped five Palestinians.

Also on Tuesday at dawn, the army invaded several towns and refugee camps in northern West Bank city of Nablus, broke into and searched dozens of homes, before kidnapping nine Palestinians, and injuring eight others.