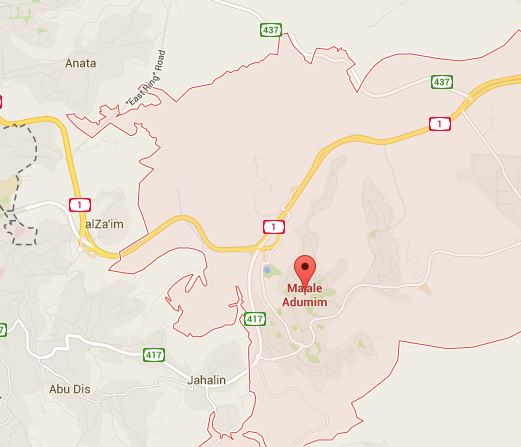 Israeli media sources have reported that an Israeli security guard was seriously injured after suffering several stab wounds, in a the Ma’ale Adumim settlement mall, before the attacker fled the scene.Israeli daily Haaretz said dozens of soldiers were deployed in the area following the attack, and that the wounded Israeli security guard is 47 years old.

It said the man was found unconscious and bleeding on the ground, suffering several stab wounds, and that the incident took place approximately at 1:15 after midnight.

Israeli medics provided the guard with life-saving treatment before moving him to Hadassah Ein Karem Hospital, in Jerusalem, where he was admitted to surgery.

Haaretz added that Israeli Internal Security officers are dealing with the stabbing as a “politically motivated attack,” and closed Ma’ale Adumim to all Palestinian workers until this coming Sunday.

On its part, Israeli Ynet News said the police is dealing with the stabbing as a “nationalistically motivated attack,” a term Israel uses to refer to attacks carried out by Palestinians.

According to the “Israeli National News Agency,’ the police found, on Friday morning, an axe believed to have been used by the attacker.

Although no detailed information was released to the media, the agency said the attacker, who was not named, carried a permit allowing him to work in Ma’ale Adumim, and that he was in the mall an hour after it closed.

The army and the police are now conducting an extensive search campaign, in an attempt to locate attacker, who managed to flee the scene unharmed.

The army closed the main road, near Ma’ale Adumim, to all Palestinian traffic, causing a huge traffic jam.