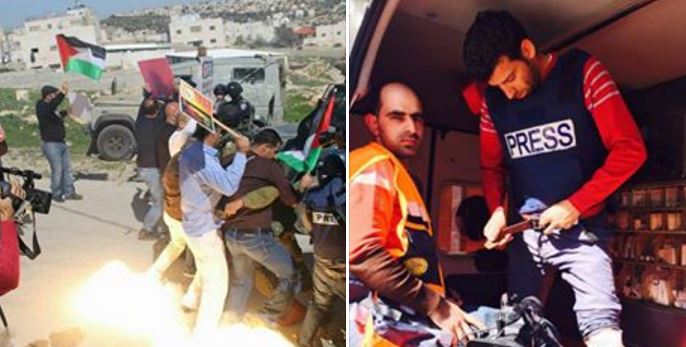 Israeli soldiers attacked, Friday, dozens of Palestinians, accompanied by Israeli and international peace activists, holding a nonviolent protest, demanding Israel to reopen the Shuhada Street, in Hebron’s Old city. The attack caused several injuries.The Hebron Defense Committee said the protesters carried Palestinian flags, and posters in Arabic, English and Hebrew, demanding the removal of Israeli colonizers from the heart of Hebron city, and to lift the siege on Shuhada Street.

They started their procession from Nimra area, heading towards the entrance of the Old City of Hebron, demanding Israel to lift its closure of the Shuhada Street, to allow the Palestinians to reopen their stores, and be able to move freely without the choking Israeli restrictions, and siege.

Issa Amro, the coordinator of the Youth Coalition against Settlements, said the soldiers fired several gas bombs and concussion grenades, causing many protesters, and journalists, to suffer the effects of teargas inhalation.

It is worth mentioning that Israel closed the Shuhada Street in 1991 after Israeli terrorist Baruch Goldstein stormed the Ibrahimi mosque and opened fire on the worshipers, using his Israeli-issued automatic rifle, before the worshipers managed to kill him.

By the end of the year 2000, Israel prohibited the Palestinians from even walking in the Shuhada Street, and only allowed the nearly 600 settlers, who illegally reside there, to use the street.

Israel also closed more than 500 Palestinian stores in the heart of Hebron city, and installed at least 100 roadblocks, and iron gates, in the Old city, while the settlers have unrestricted freedom of movement.

Also on Friday, dozens of Israeli soldiers attacked the weekly nonviolent protest against the Annexation Wall and colonies, in Bil’in, and Ni’lin villages, west of the central West Bank city of Ramallah.

The army also attacked the weekly protest in Kafr Qaddoum town, east of the northern West Bank city of Qalqilia, wounding one Palestinian with a gas bomb in his head.