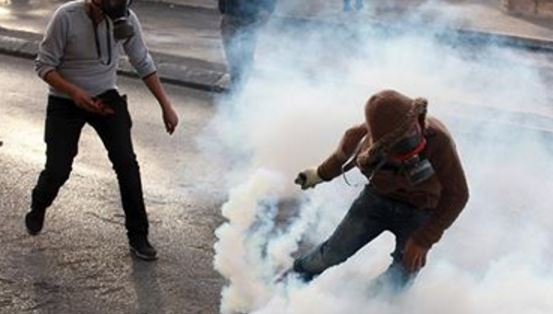 One Palestinian was shot with a sponge-tipped bullet, Friday, and many suffered the effects of teargas inhalation, after Israeli soldiers assaulted the weekly nonviolent protest against the Annexation Wall and colonies, in Ni’lin village, west of Ramallah. The soldiers invaded the village and fired several gas bombs and sponge-tipped bullets, wounding one Palestinian with a bullet in his shoulder, while many residents suffered the effects of teargas inhalation.

The soldiers assaulted the nonviolent protesters as they marched chanting against the ongoing Israeli occupation and violations, and in solidarity with the detained journalist Mohammad al-Qeeq, who ended his strike, Friday, after an agreement for his release was finally reached, following 93 consecutive days of hunger strike. He will be released on May 21.

Also on Friday, dozens of Israeli soldiers attacked the weekly nonviolent protest against the Annexation Wall and colonies, in Bil’in village, west of the central West Bank city of Ramallah.

The army also attacked the weekly protest in Kafr Qaddoum town, east of the northern West Bank city of Qalqilia, wounding one Palestinian with a gas bomb in his head.