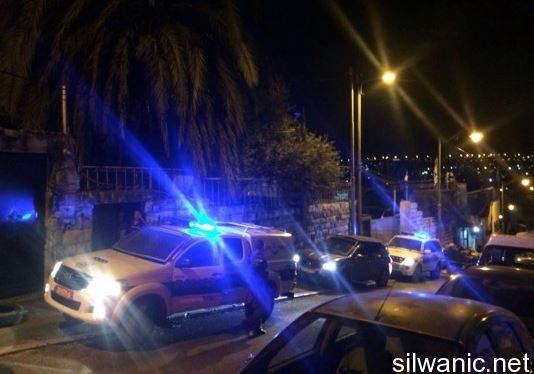 Israeli soldiers shot, on Sunday, a Palestinian teen in the al-‘Isawiyya town, in occupied Jerusalem, and kidnapped him. The army also kidnapped another Palestinian and invaded several neighborhoods leading to clashes.The Wadi Hilweh Information Center in Silwan (Silwanic) has reported that the soldiers invaded Abu Ryala neighborhood, in al-‘Isawiyya, before storming and violently searching a number of homes, and used their rooftops as monitoring towers.

Silwanic added that the clashes, that erupted in Abu Ryala neighborhood after the army invaded it, extended to Dari neighborhood and that the soldiers fired several live rounds and dozens of gas bombs.

Medical sources said resident Mohammad Waleed Obeid, 19, was shot in the thigh with a Toto hollow bullet, which detonates upon impact while many residents suffered the effects of tear gas inhalation.

The soldiers assaulted Obeid after shooting him, and dragged him onto the ground before he was moved to Hadassah Ein Karem Medical Center.

Besides his gunshot wound, Obeid suffered a fracture in one of his legs, in addition to several cuts and bruises. The soldiers also removed his family from the hospital when they went there to see him.

In addition, the soldiers kidnapped Khaled al-‘Abbassi, 19, as he was walking him in the Central Neighborhood, in Silwan town, after repeatedly kicking and beating him.

Silwanic stated that dozens of soldiers were deployed in the neighborhood, on Sunday evening, and broke into a home, before searching it, and used it as a monitoring tower.

It also said that the soldiers assaulted a young man, riding his bicycle in the area, after an Israeli settler’s car collided with a Palestinian car.

The soldiers used excessive force to remove the residents, who gathered in the area, and sprayed their faces with pepper-spray.