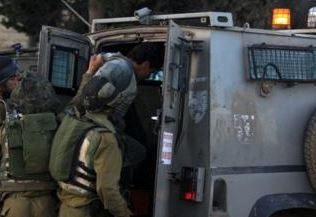 Israeli soldiers have kidnapped, on Monday at dawn, at least eight Palestinians, in different parts of the West Bank, and took them to a number of interrogation facilities and military bases. The army also demolished residential structures east of Tubas.Several army vehicles invaded the northern West Bank city of Nablus, searched homes, and kidnapped a young man, identified as Mujahid al-Qutub.

In addition, the soldiers also kidnapped Ahmad Bilal Abu ar-Rob, from Qabatia town, south of the northern West Bank city of Jenin, as he was working in al-Batouf, in the Galilee.

Another Palestinian, identified as Ahmad Hafeth Sa’aida, was kidnapped after the soldiers invaded and ransacked his home, in the al-Yamoun town, northwest of Jenin.

In the southern West Bank district of Hebron, the soldiers invaded and searched a number of homes in Hebron city, and Surif town, northwest of the city, and kidnapped three Palestinians.

Media sources in Hebron said the soldiers kidnaped Mohammad Arafat al-Qawasmi, from his home in Abu Kteila area, in addition to Yousef Wahid Abu Farra, 25, and Taqieddin Jamal al-Hour, 23, from their homes in Surif.

In related news, several army jeeps and bulldozers invaded the al-Farisiyya area, in the West Bank’s Northern Plains, east of Tubas, and demolished residential tents and structures, belonging to four families. The attack is the second this month.