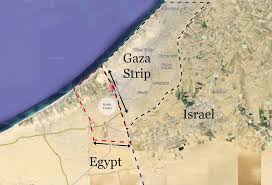 A group of Israeli farmers were fired upon by Israeli troops in the Rafah region of southern Gaza on Tuesday.The farmers reported that Israeli troops stationed along the southern border of Gaza, where Gaza borders Egypt, began to fire live ammunition toward them as they were farming their land.

Israeli troops have, in recent years, bulldozed hundreds of homes and hundreds of acres of farmland in Rafah in order to create a “buffer zone” along the border. The Palestinians who lost their homes and livelihood received no compensation for their losses, and if they make any attempt to return to their land, they are shot at by the Israeli military.

During the past two weeks alone, Israeli troops have fired upon Palestinians in the Rafah “buffer zone” at least two dozen times, according to the United Nations.

In the shooting incident on Tuesday, no farmers were injured, but they were forced to leave the area in the middle of their planting.