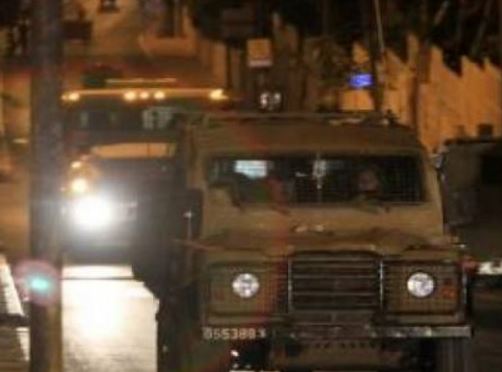 Israeli soldiers have kidnapped, earlier Thursday, at least nine Palestinians in different parts of the occupied West Bank, assaulted and injured another, and demolished a gas station. A Young woman was also detained near Jericho, reportedly after mildly wounding an officer.Media sources in Jenin, in the northern part of the occupied West Bank, has reported that several Israeli military vehicles invaded the city, searched and ransacked homes, and kidnaped two teenagers, identified as Emad Jamil Sabaghna, 19, and Yazeed Hosni Arqawi, 17.

The sourced added that the soldiers broke into the home of Monjed Arqawi, held him and his family in the bathroom, interrogated and repeatedly assaulted his son Monjed, 17, in a different room, causing various cuts and bruises that required hospitalization.

He was initially summoned for interrogation in a military base, between Jerusalem and Bethlehem, and was kidnaped directly after he reached it.

The army also invaded and searched homes in Hindaza area, east of Bethlehem, and Husan town, west of the city, and interrogated the families.

In addition, the soldiers invaded and searched many homes in Iraq-Burin town, south of the northern West Bank city of Nablus, after closing its entrances with sand barriers, and kidnapped five Palestinians.

The soldiers also closed the Huwwara and Awarta military roadblocks, in addition to the main road that links between Nablus and the districts of Qalqilia and Tulkarem.

In related news, many army vehicles invaded Hizma town, northeast of occupied Jerusalem, and demolished a gas station, belonging to resident Haitham al-Hilo, allegedly for being built without a construction permit.

In Hebron city, in the southern part of the West Bank, the soldiers invaded and searched many homes, and kidnapped Fadi Abdul-Hafith Tamimi, 23.

Dozens of soldiers were also deployed on all roads leading to Beit Ummar town, north of Hebron, and installed roadblocks in various areas, before stopping and searching dozens of cars, and completely obstructed traffic to all Palestinians driving on the Jerusalem-Hebron road.

Furthermore, soldiers detained a young Palestinian woman in the al-‘Oja village, in Jericho, reportedly after she attempted to stab a police officer directing traffic after a tree fell down on road #90; the officer suffered a mild shoulder injury.

The Israeli Police also said one if its vehicles came under fire near Ariel Israeli colony, in the northern part of the occupied West Bank.

On Wednesday evening, the soldiers conducted searches in various hills and mountains in Jenin, especially in Jaba’ town, while a military helicopter flew overhead firing flares.