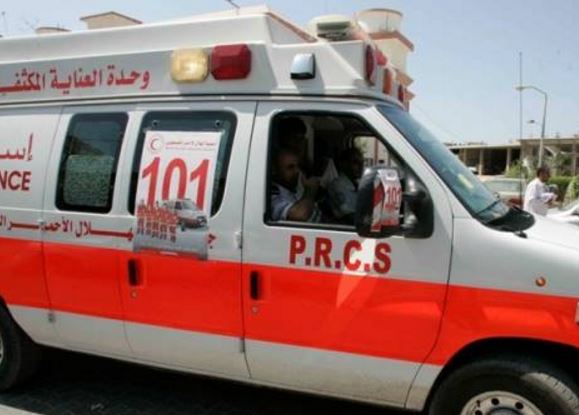 Palestinian medical sources have reported, Friday, that two medics of the Palestinian Red Crescent Society suffered the effects of tear gas inhalation, after Israeli soldiers fired a gas bomb into their ambulance, at the northern entrance of Bethlehem city. One Palestinian was kidnapped in Husan. Mohammad Awad, head of the Emergency Unit of the Red Crescent, said the soldiers deliberately fired gas bombs at the ambulance, near Bilal Bin Rabah Mosque, as the medics were trying to provide medical aid to wounded Palestinians.

Awad added that one of the gas bombs struck the windshield of an ambulance, causing two medics, identified as Ayman Da’absa and Fadi Ja’afra, to suffer severe effects of tear gas inhalation.

He also said that many Palestinians suffered the effects of tear gas inhalation, and received the needed treatment.

In related news, the soldiers invaded Husan town, west of Bethlehem, and kidnapped Safwan Yousef Hamamra, 21, while standing in front of their home in the al-Mateena area, in the center of the village.
The soldiers also harassed and assaulted many residents, and interrogated them while inspecting their ID cards.