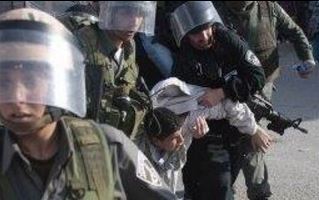 Israeli soldiers invaded, on Sunday evening, the town of Arraba, southwest of the northern West Bank city of Jenin, before breaking into and searching a coffee shop and a car dealership, near the town’s junction.The soldiers invaded and ransacked a coffee shop belonging to resident Jihad Mousa, before interrogating him, and several other Palestinians.

In addition, the soldiers invaded a car dealership, owned by resident Ayman Ghaleb, and searched it.

The soldiers also drove around provocatively, and harassed several residents, pushing many youngsters to hurl stones on the military vehicles, while the army fired gas bombs.

It is worth mentioning that dozens of soldiers were deployed on the main roads leading to the towns of Ya’bad, Kfeirat, and Um ar-Meehan, and installed many roadblocks before stopping and searching dozens of cars.