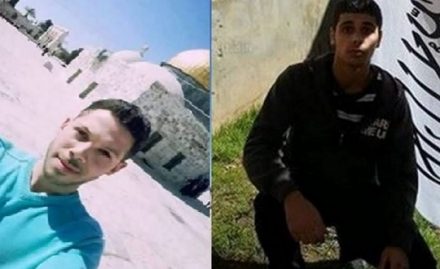 Israeli sources have reported, on Wednesday morning, that the soldiers have killed two Palestinians in Jerusalem, and that one Israeli was injured, in two separate attacks in the city.

The sources said that the two Palestinians reportedly rammed an Israeli with their car, near Bab al-‘Amoud area, in Jerusalem, seriously wounding him.

The sources added that the two Palestinians were also behind a shooting attack, carried out earlier on Wednesday, in “Ramat Shlomo” northwest of Jerusalem.

According to the military, the two fired several live rounds on a settlement bus, before the police and the army chased them, and installed many additional roadblocks, in an attempt to arrest them.

They were both shot dead after carrying out the second attack, the Israeli military alleged.

The Wadi Hilweh Information Center in Silwan (Silwanic) said the two were killed in the New Gate area, in Jerusalem, after exchanging fire with Israeli soldiers.

The Israeli police said the it chased a vehicle matching the description of the car that fled following the shooting in Ramat Shlomo, and that two Palestinians opened fire on the soldiers after they managed to stop their car.

The Health Ministry said the soldiers left the two Palestinians bleeding near their car, and that one of them died on the scene while the other died in an Israeli ambulance later.

In addition, a Palestinian, identified as Emad Abu Ali, 56, suffered a serious gunshot injury in his head, while walking in the New Gate area, when the fire exchange took place.

The Israeli army and police closed the New Gate Street, near Notre Dame Hotel, and imposed a strict siege on the area, extending between the New Gate area and the al-Misrara neighborhood, all the way to Bab al-‘Amoud, Sultan Suleiman Street, Sahera Gate and Salaheddin Street, where hundreds of soldiers and military police officers were deployed, and installed dozens of roadblocks.