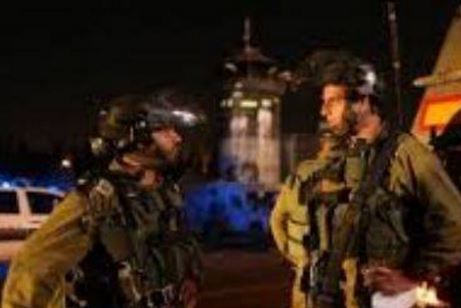 Israeli soldiers have kidnapped, earlier on Thursday, four Palestinians from the West Bank district of Bethlehem, one of them from his home in al-Khader town, two Palestinian workers, also from al-Khader, were kidnapped in Jerusalem, while a fourth resident was kidnapped on the Container Roadblock.Media sources in Bethlehem said the soldiers invaded the al-Khader town, south of Bethlehem, and kidnapped Yousef Na’im Ghneim, 31, after storming his home and searching it.

Ghneim is a former political prisoner, who previously spent many years in Israeli prisons and detention centers.

The soldiers also kidnapped two Palestinian workers, identified as Mohammad Ibrahim Mousa and Mohammad Adel Issa, in their twenties, while working in Jerusalem, allegedly for not carrying work permits. The two are from the al-Khader town.

Salah said the colonizers came from Danial illegal colony, built on the residents’ lands, after cutting through the barbed-wire fence, and hurled stones at his home while he, his wive and their son were there.

‘We have been subject to various sporadic attacks over the past 17 years; the Israeli army knows about the attacks but never does anything to stop them,’ Salah stated, ‘They want us to leave. They want our land to expand their illegal colony, but this is our land, and we are here to stay.’