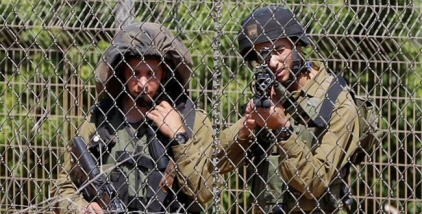 Israeli occupation forces have now deployed troops and equipment along the Lebanese border, and stepped up military activities in th region on Wednesday, according to Lebanese sources.For the second consecutive day in a row, the army fired tear gas canisters at Lebanese herders and local farmers working near the border with the occupied Palestinian territories, The Daily Star reported, according to PNN.

“We were proceeding with our lives normally, and everyone was working their land. Then we saw the Israeli patrol and its members begin shooting tear gas at us,” Mustafa Ahmad, one of the herders, said.

On Tuesday, local residents said forces repeatedly shot tear gas canisters during the morning hours. Shortly after, a large number of Israeli military jeeps were stationed in an illegal Israeli settlement across the Lebanese village of Kfar Kila.

According to witness accounts, the military used trees and shrubs for cover, and monitored the movements within Lebanon as motorized patrols were conducted.

According to alBawaba, local sources say Israeli patrols along the border have increased in the past week, with Israeli soldiers taking up ambush positions in the area.

The activities have sparked fears among local residents, who question the motives behind Israel’s latest transgression, The Daily Star said.