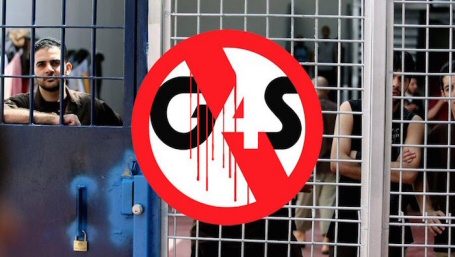 Following concerted BDS campaigns, G4S to exit the Israeli market and Ahava to relocate from the West Bank to inside the Green Line.On Thursday morning, G4S, the British-Danish private security giant pledged to sell its Israeli subsidiary in 12 to 24 months. The company explained the decision as part of a “continuing portfolio management program.”

G4S has been the focus of sustained international Boycott, Divestment, Sanctions (BDS) campaigns, due to its collusion with Israel’s incarceration, torture and oppression of Palestinians. The company has lost millions of dollars, thanks to such efforts. Recently, a major restaurant chain in Colombia and UNICEF, in Jordan, ended their contracts with the company, as did the Gates Foundation when it divested its $170 million stake in G4S, in 2014.

Samidoun Prisoner’s Solidarity Network described the announcement as “a clear recognition of the growing strength and power of the international BDS movement targeting G4S in response to calls from Palestinian prisoners and civil society organizations.”

Sahar Francis, the Director of Addameer Prisoners Support and Human Rights Association, however, highlighted the limited significance of G4S’s decision for the thousands of Palestinians currently being held in Israeli prisons to call for more concerted action:

The latest reports that G4S will sell its subsidiaries in Israel is welcome news, but this has no immediate effect on those facing human rights violations inside Israel’s prisons today. At a time when Israel is stepping up its campaign of mass incarceration as a way of repressing Palestinian society, G4S should end its role in Israel’s prison system immediately, as well as its role in maintaining Israeli checkpoints and illegal settlements.

The Palestinian BDS National Committee has pledged to continue to pressure G4S until its Israeli subsidy is actually dissolved.

In the same announcement, G4S pledged to end contracts with the UK Utility services, US Youth Justice Services and UK children’s services.

G4S is also complicit in human rights abuses by supporting detention and deportation systems at the US/Mexico border and in Canada, and running juvenile detention facilities in both the U.S. and the U.K.

The same day, Ahava, an Israeli cosmetics company, reported that it will move its plant from Mitzpeh Shalem, in the West Bank, to Kibbutz Kin Gedi, an area close to the original plant but within the Green line. The construction of the new site will take approximately two years.

BDS campaigns have advocated boycotting Ahava (see: Code Pink’s Stolen Beauty campaign) because it exploits natural resources in the occupied West Bank and operates a factory in it.

In his column, Richard Silverstein describes the decision as “solely a business matter,” considering a Chinese company’s purchase of the company. “Likely,” he adds, “the new Chinese corporate owners, who purchased the company last September for $75 million, didn’t want the headache of constant protests around the world and having their name dragged through the ‘mud.’”

He adds that the profits of the $75 million purchase will go to the current Israeli owners of the company, most of whom are settlers in the West Bank, as well as the Livnat family, members of which enjoy enormous political and capital power in Israel, and profit from Israeli occupation.

Nevertheless, the move is another a sign that BDS campaigns are gaining traction.

SEE! A week of Israeli occupation at AIC official.