60 Palestinians without Permits Detained inside Israel 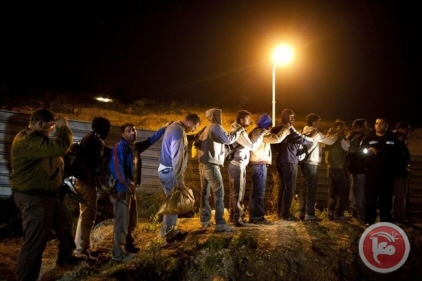 Israeli police, on Wednesday, reportedly detained at least 60 Palestinian workers who were caught inside the Israel border without work permits.According to Hebrew media, Israeli forces detained 25 Palestinians from northern Israel, 15 from the Tel Aviv area, and 20 from the Negev.

The detention campaign follows a deadly attack in the Israeli coastal city of Jaffa, on Tuesday, where a Palestinian who had reportedly been living and working in Israel, illegally, stabbed and killed an American tourist and injured at least nine others.

The Palestinian, identified as Bashar Masalha, 22, was shot dead at the scene.

In addition to cracking down on workers inside Israel illegally, Israeli forces on Wednesday announced that work permits would be revoked from Palestinians residing in Masalha’s hometown of Hajja village, in the northern occupied West Bank district of Jenin.

The move, Ma’an further reports, was the second time this year that Israeli authorities have revoked work permits from entire areas, following attacks carried out by individual actors.

Early last month, Israeli authorities announced that work permits were being revoked from residents of Qabatia, a village in the northern occupied West Bank, after a deadly attack carried out by three teens from the village.

Palestinians who seek to work in Israel need a special work permit usually granted by the Israeli Civil Administration, in coordination with the Israeli Ministry of Labor, but such permits are difficult to obtain.

Immigration of a foreign workforce into Israel increased, primarily during both the First and Second Intifadas, as Israeli employers sought to replace Palestinian workers who were unable to come to work, due to severe Israeli restrictions on movement, according to the International Federation for Human Rights.

Despite this, the Bank of Israel reported that, in March, the number of West Bank Palestinians working in Israel — legally and illegally — has doubled in the past four years.

Tens of thousands of Palestinian workers are forced to seek a living by working in Israel, as the growth of an independent Palestinian economy has been stifled, in the occupied West Bank, under the ongoing Israeli military occupation, according to Israeli human rights organization B’Tselem.