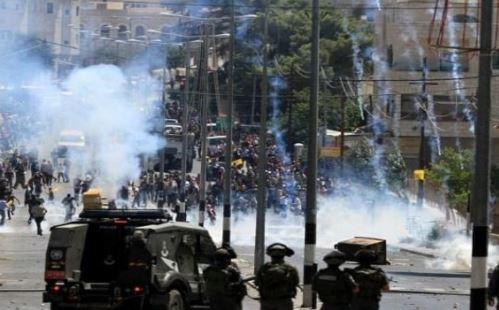 Israeli soldiers invaded, on Friday evening, Abu Dis town, east of occupied Jerusalem, and clashed with dozens of local youths, wounding nineteen Palestinians, including one who was shot in his eye.Bassam Bahar, head of the Abu Dis Lands Defence Committee, said the several Israeli military vehicles invaded the town and fired dozens of gas bombs, and rubber-coated steel bullets.

The Red Crescent Society said 19 Palestinians were injured, four of them with rubber-coated steel bullets, including one who was shot in the eye, and fifteen others suffered the effects of teargas inhalation.

Many Palestinians were also injured at the northern entrance of the West Bank city of Bethlehem, during clashes with Israeli soldiers.

Medical sources said some of the wounded were shot with rubber-coated steel bullets, and many others suffered the effects of teargas inhalation.