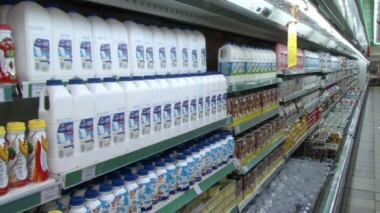 Israeli troops, on Sunday, suppressed a peaceful rally organized by five dairy companies at Ofer checkpoint, to the southwest of Ramallah, to protest being denied the marketing of their products in Jerusalem.Soldiers attacked, with teargas canisters, a convoy of trucks belonging to the five companies, while gathering near the checkpoint in protest.

Israel recently decided to ban the five companies – Hamoudah, al-Jideedi, Arryan, Asslwa and Saniora – from selling their products in Jerusalem.

Amjad Muhtaseb, a marketing official at al-Jideedi, told WAFA that Israeli authorities cited a lack of Hebrew labels at the five companies’ products, as a pretext to ban their selling in Jerusalem, describing the decision as a “political” one.

He added that the decision constitutes a violation against Paris Protocols, signed between Israel and the Palestinian Authority in 1994.