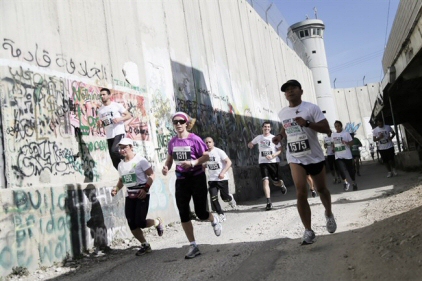 Thousands of Palestinians and foreigners took to the streets on Friday, to take part in the fourth annual marathon to be hosted by the Palestinian city of Bethlehem, aimed at highlighting the severe movement restrictions Palestinians face under Israel’s military occupation.

First conceived in 2013 under the theme “Right to Movement,” the marathon was applauded by the UN and other humanitarian bodies as a reminder of the “many barriers to freedom of movement faced by Palestinians every day,” although Israel condemned it as a “cynical” use of sport.

Setting out from the Church of the Nativity, the traditional birthplace of Jesus Christ, runners made their way past Israel’s imposing separation wall, which cuts around much of the city, before passing Duheisha refugee camp and the town of al-Khader, near Gilo military checkpoint.

“Everyone has the right to freedom of movement, but not everyone has the option,” the marathon’s organizers had written on their website, according to Ma’an.

“Restriction on movement is one of the major challenges for the Palestinian people living under occupation. Palestinians cannot move freely on roads, or from one city to another.”

Because the Palestinian Authority does not control a contiguous 42 kilometers in Bethlehem district — the distance of a full Olympic marathon — the run was instead forced to loop around an 11 kilometer stretch. Nearly 4,400 runners took part in this year’s marathon — up from 3,100 last year — with a record 46 percent participation of women, far surpassing the 39 percent that joined 2015’s run.

In a stark reminder of the strict movement restrictions faced by Palestinians, no runners from the Gaza Strip were able to participate this year, despite a formal request from the PA asking Israel to allow 102 Gazans leave the blockaded coastal enclave.

In a statement, Israel’s Coordination for Government Activities in the Territories implied that the Palestinian leadership had deliberately not given them enough time “for dealing with such requests.”

They said the request was a “provocation” and an attempt to “delegitimize Israel,” adding: “It’s unfortunate to witness cynical using of the sport.”

However, the UN strongly welcomed the marathon, saying in a statement that numerous “humanitarian and development actors, including UN agencies,” were joining the run “in support of Palestinians’ right to liberty of movement.”

Robert Piper, the UN’s coordinator for humanitarian aid, said: “As many of us join this celebratory event, we remain acutely aware of the many barriers to freedom of movement faced by Palestinians every day. “I am sorry to hear that Gazan runners, including last year’s Marathon winner Nader al Masri, have not been granted permits by the Israeli authorities to participate in today’s event for example.”

The UN statement highlighted the extensive movement restrictions faced by Palestinians, which it said “permeate almost all facets of everyday life and continue to separate Palestinians and fragment the territory.”

It pointed in particular to Israel’s separation wall, checkpoints, roadblocks, as well as Israel’s use of travel permits and the closures of entire areas, while it condemned Israel’s crippling eight-year blockade of the Gaza Strip.

Piper said that if Israel was to address its security concerns, it must do so “without imposing wide-ranging restrictions on the population as a whole.”

VIDEO: In Palestine, You Can’t Run More than 10KM Without Passing a Checkpoint, Camp, or The Wall