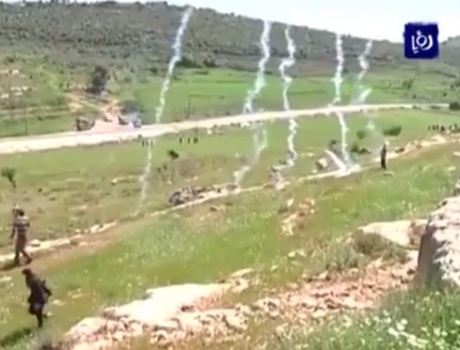 The soldiers used excessive force against the protesters, and assaulted journalists of the Roya News Agency. The army detained the journalists and attempted to confiscate their equipment, while fanatic Israeli colonizers assaulted the journalists, and one of them started disrupting the live broadcast of a female reporter for the news agency.

One of the fanatic colonizers stole the camera from the Roya team, but the reporters and staff managed to retrieve it, despite the Israeli army’s protection of the assailants and its inaction towards their assault and theft.

One fanatic colonizer also chanted Zionist slogans, and disrupted the broadcasts of the reporters, but the anchorwoman continued her coverage.

The attacks took place as Palestinians and international peace activists marched marking the fortieth Palestinian Land Day (March 30), and challenged the ongoing Israeli violations and escalation against Palestinian people, their lands and property, in different parts of occupied Palestine.

Nonviolent activist Abdullah Abu Rahma said the Palestinians will never abandon their legitimate right to their homeland, the land of their fathers and forefathers, and will continue to resist this illegal Israeli occupation and oppression.

Nonviolent activist Mohammad Tamimi said the Palestinians will remain steadfast in their homeland, and will continue their struggle until liberation and the establishment of the independent, sovereign Palestinian state, with Jerusalem as its capital.

Despite the extensive Israeli military restrictions, the nonviolent protesters managed to reach a water spring that Israel is trying to illegally confiscate from the Palestinians.

The spring is on Palestinian land in the northeastern part of the Nabi Saleh, and Israel is trying to confiscate it for the usage of its colonies, which are illegally constructed in occupied Palestine. 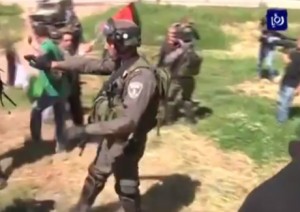 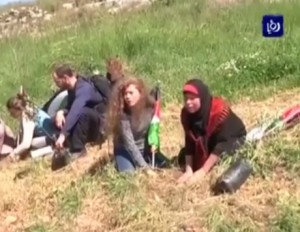