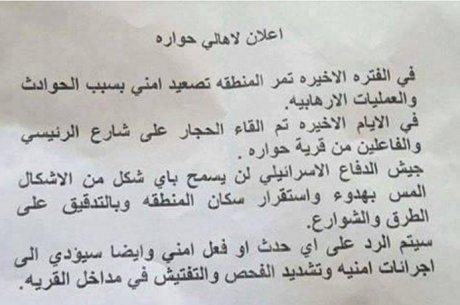 On Sunday, Israeli soldiers forced all stores on the main road in Huwwara town, south of the northern West Bank city of Nablus, to shut after Palestinians allegedly hurled stones at army vehicles and cars of Israeli colonizers living in illegal nearby colonies.

Eyewitnesses said several army vehicles invaded the area, and forced all stores to shut before distributing leaflets threatening severe punishment and harsher military measures, including installing many roadblocks on all roads leading to Huwwara.

In the distributed leaflets, the Israeli army said that the Huwwara area recently witnessed “a serious escalation” of stone throwing at military vehicles and settlers’ cars.

The statement from the Israeli army read as follows:

“Recently, the area has witnessed a serious security escalation due to accidents and terrorist attacks…

In recent days, there have been many incidents of throwing stones on the main road, and the assailants are from Huwwara…

The Israeli Defense Forces will not allow any form of instability, and will retaliate to any security incident with harsher measures, and more checkpoints on the main roads…”