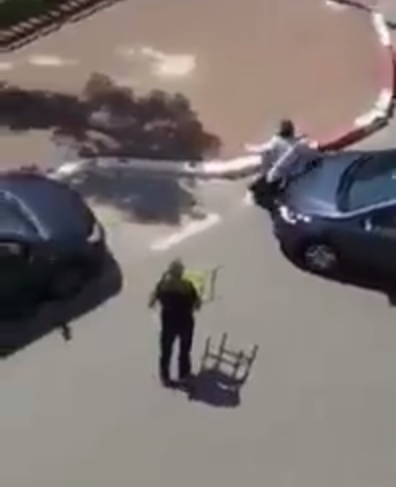 A 23-year old woman from the town of Qafr Qassem, in the Negev desert, was detained by Israeli police after allegedly stabbing an Israeli woman lightly in the hand, in an industrial park near Tel Aviv Sunday.

The 23-year old alleged assailant was taken to an Israeli detention center for interrogation, and will likely face charges of attempted murder, as well as terrorism charges – based on past charges against Palestinian assailants in Israel. Her lawyer told reporters that the incident may have involved a personal dispute between the two women, and said that Israeli authorities tend to jump to conclusions when the assailant in any case is a Palestinian.

The alleged victim of the attack, a 30-year old woman from Qafr Saba, was taken to Rabin Hospital in Petah Tikva with a cut on her hand.

A group of Israeli citizens who were standing nearby started chasing the Palestinian woman (who also has Israeli citizenship), according to one person who spoke with Israeli Channel Two television, claiming that he and another man “took down” the alleged assailant.

The person who spoke with Channel Two also told reporters that he and other men threw stones and chairs at the 23-year old woman, and tried to run her down with a car. He said that he and one other man then pinned the woman against a fence and held her down on the ground until police came and arrested her.

Ihab Galgoly, the lawyer representing the alleged assailant, told reporters from Ha’aretz news agency, “It’s impossible to buy this story of a terror attack immediately; we need to look into what happened on the ground and what developed during those seconds. It could be that someone hurt her or there was an argument that developed into what happened, and it’s enough that she’s an Arab with a headscarf to define her as a terrorist.”

Qafr Qassem, the alleged assailant’s hometown, was the site of a massacre on October 29, 1956, in which Israeli border police attacked a group of Palestinians for allegedly violating a curfew, killing 49 civilians, 23 of whom were children. The border police responsible were charged, but were pardoned after serving less than a year in prison.