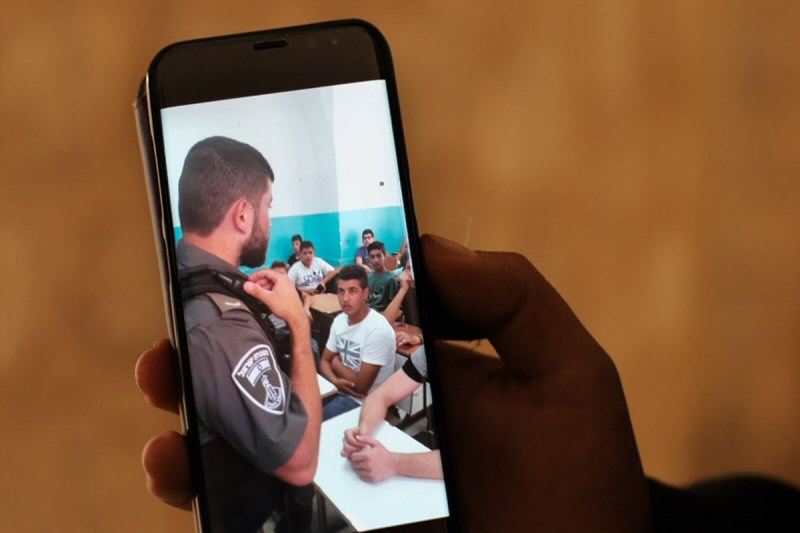 As part of Israel’s attempt to claim occupied East Jerusalem part of its capital, it started to imposed Israeli curriculum on Palestinian schools.

The Zahwat al-Quds kindergarten and primary school’s walls are decorated with colourful cartoons, while its students are dressed in grey-and-red striped uniforms.

The children’s wide smiles and laughter echo through the hallways, belying their lingering anxiety after a recent Israeli raid on the school.

At the start of the school year, Israel began targeting Zahwat al-Quds – which serves some 90 students between the ages of three and nine in the neighbourhood of Beit Hanina – because staff refused to teach the Israeli curriculum, according to parents and school staff.

“Israel wants everything under their control,” school cofounder Muna Ateeq told Al Jazeera, speaking under a pseudonym for fear of repercussions.

“They really want to influence education so that they can more easily control the next generation of Palestinians.”

There are three types of schools in occupied East Jerusalem: public, private and Palestinian government schools. All have different experiences and relationships with the Israeli state.

Zahwat al-Quds is a private school that had an Israeli permit and funding from the Jerusalem municipality up until July, when Israel abruptly revoked its permit. The school has since obtained a permit from the Islamic Waqf, which is connected to the Palestinian government.

The Israeli permit was revoked as part of Israel’s goal to shut down private Palestinian schools in occupied East Jerusalem that teach the Palestinian curriculum, and to force students to attend the public schools that are directly controlled by Israel, Ateeq said.

In September, three Israeli officials entered Zahwat al-Quds to notify staff that it was being shut down. They returned last month, searching classrooms, detaining three teachers and the deputy principal, and photographing some of the children. One child urinated on herself and another fainted during the incident, Ateeq said.

Ziad al-Shamali, who heads an East Jerusalem parents’ committee, told Al Jazeera that some children began experiencing nightmares and bed-wetting after the raid, citing “lasting psychological impacts”. Parents are getting scared to send their children to school, he added.

“They can’t shut us down legally, so they put pressure on us socially in order to force us to close,” Ateeq said.

According to some Palestinians in East Jerusalem, the raids on Zahwat al-Quds come in the context of Israel’s goal to systematically depoliticise young Palestinians by pushing them into public schools, where Israel can more easily control what they are learning.

“Israel doesn’t want the children to learn about what has happened here,” Ateeq said. “They hope that in the future, everyone will eventually forget about it.”

Israel did not decide to impose its education curriculum on Palestinian schools overnight. According to Samira Alayan, a researcher and lecturer at Hebrew University who has been studying this issue for a decade, Israel has tried to control Palestinian education in East Jerusalem since 1967, when Israel occupied and subsequently annexed the territory.

In East Jerusalem’s public schools, a censored version of the Palestinian curriculum is taught. “When the books arrive in Jerusalem, Israeli authorities peruse them and delete sentences and paragraphs that are against Israeli ideologies,” Alayan told Al Jazeera.

She noted that Israel is “looking for any content offensive to Israel, including anti-Israeli expressions and any mention of [the] Palestinian Authority”.

The result is textbooks missing paragraphs and sentences, and sometimes entire pages are blank. Israel perceives this censorship as a preventive tool against Palestinian “incitement”, Alayan noted in a 2017 article exploring the issue.

However, “another purpose could be to prevent the students from developing a positive sense of identity based on the Palestinian narrative”, Alayan wrote.

“This implicit aim of censorship is yet another example of a wish to erase or eliminate the Palestinian narrative by the settler colonialist regime.”

This censorship was a compromise for the Israeli state, after Palestinians in Jerusalem flat-out rejected the Israeli curriculum during the early years of occupation. Israel’s goal is to teach Palestinians that the land of historic Palestine was in fact empty of people when the state of Israel was founded in 1948, and that Arthur Balfour gave this uninhabited land to the Jews.

“It doesn’t teach you anything about being Palestinian,” Alayan said.

Sawsan Safadi, the head of public and international relations at the Waqf’s education department, told Al Jazeera that Israel aims “to create a new generation of Palestinians who feel like the occupation is normal, which will lead to them recognising themselves as Israelis, not Palestinians”.

Israel is attempting to further its claims that Jerusalem is a part of Israel, rather than an integral part of a future Palestinian state, by changing facts on the ground, Shamali noted.

“They want to show the world that this is an Israeli city with Israeli schools that even play the Israeli national anthem,” Shamali said, adding that Israel has even changed street names and locations to Israeli ones on GPS and on Facebook, knowing that younger generations rely heavily on such technology.

Israel’s efforts have been meeting with success, as more than 20 Palestinian schools in occupied East Jerusalem have introduced an option to study an Arabic version of the Israeli curriculum. The identities of East Jerusalem Palestinians have been eroded due to their statelessness and their physical separation from the rest of the occupied territory by Israel’s separation wall, Alayan said.

The funding and management of schools are completely controlled by Israel, which provides an increased budget for those willing to accept the Israeli curriculum, Alayan noted.

“The control Israel has on schools has created a culture of silence, whereby people are accepting things even though they don’t agree with it,” she said.

From the second level of the Dar al-Aytam boys secondary school in the Old City, the golden Dome of the Rock can be seen clearly, but Israeli raids routinely interrupt this serene landscape.

Israeli police, soldiers and special forces regularly raid the school, allegedly searching for students who have thrown stones at Israeli officials near the school.

Safadi says such allegations are often false, pointing to several locations from where boys were alleged to have thrown stones; tall metal barriers and fencing would make this impossible.

According to the school’s principal, Fadi Khalil, Dar al-Aytam was raided more than 10 times last year. During one such raid, the former principal was detained and expelled from the Old City for 45 days.

“This school is the second-largest compound in the Old City after al-Aqsa,” Khalil said. “The Israelis have had their eyes on it for a long time. They are working very hard to uproot the school from the city.”

An Israeli police spokesperson did not respond to Al Jazeera’s request for comment on the matter.

As at Zahwat al-Quds, the raids have had an effect: Of the 250 students who attended Dar al-Aytam last year, 58 have dropped out.

Mumen al-Taweel, 18, was just 14 when he was sent to Israel’s HaSharon prison for allegedly throwing stones. He spent a year and a half there. “We all want to study, but Israel doesn’t want us to continue our education,” he said.

Another student, 16-year-old Amir al-Rishid, was first detained when he was 10 for possessing nail cutters after a search by Israeli forces. Rishid says he has lost count of the number of times he has been arrested by Israel.

“Israel wants us to have police records at a young age, so in the future it will be difficult for us to continue our education or get good jobs. This is an intentional policy,” Rishid said.

Tahseen Elayyan, head of the monitoring and documentation department at the Palestinian human rights NGO al-Haq, told Al Jazeera that the raids and the attempts to push the Israeli curriculum on Palestinian schools are related to Israel’s ultimate goal of expelling Palestinians from the land.

“Israel wants the land, but not the people,” Elayyan said. “Palestinians who remain in Jerusalem – if the plan to push Palestinians out of the city succeeds – have to accept Israel’s narrative.”