On the 7th of November, the state of Israel demolished four houses in the Jordan Valley, making four families homeless. At 6:30 the Israeli army came photographing the house, and, shortly after, three bulldozers entered the Jiftlik village, guarded by around 30 soldiers from special forces known as ‘Yasam’. The main roads were closed off by checkpoints, preventing any movement in the village. The Israeli military encircled the house on the surrounding fields. The family of Abu Khalil Moussa could do nothing but watch their home being wrecked to pieces.

The two brothers have been staying in the house, built in 1986, with their families. Together with their father, they worked for six years in order to afford the building and maintenance of their home. One of the brothers, named Khalil,  says: “I worked for this since I was 18. In one hour they destroyed it.” Now the families are living in one room, at a relative’s  place.  Khalil also told ISM and JVS activists of how his son came to get his football before the demolition. He was shoed away, but came back to the rubble, later that day, to search for it without luck. 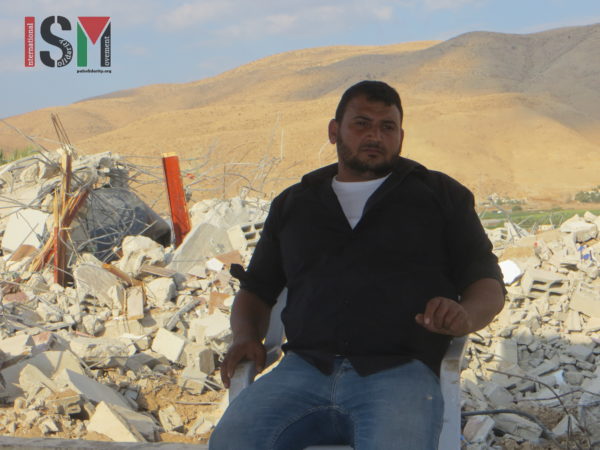 Moussa’s brother in front of their demolished house.

The neighbouring family of Merai Abu Ahmad  also lost their house. A family of 10 have stayed in the home since it was built, three years ago. The lively son of the family showed the ISMers where his room used to be. His father Ahmad is asking for support from anyone to be able to get a new home. “Life here is difficult.” He shows the rolled up tent they got from the Red Cross after the demolition: “We went from this house to this tent.” The family was forced out of their home directly from their beds, that morning. This is something they have experienced for generations. 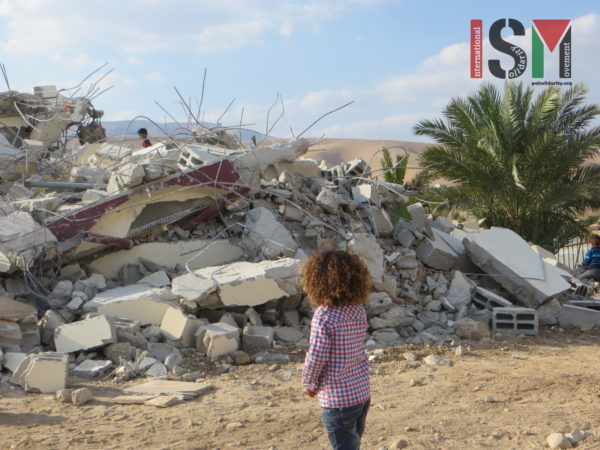 In 1967, most families in the area fled their houses. The Merai family, who had been forced to Jiftlik after being expelled by Israeli forces from the refugee camp Abu Badjad, decided to stay. The area is therefore now called Da Beit Merai, and Merai himself tells the ISM and JVS how he, in 1967, asked the military coming, “Where should I go now? You kicked me out everywhere.” He stayed put in his house, witnessing how all the neighbouring houses were being demolished. “And, now, history is being repeated.”  He explains how the Israeli armed forces stole around 400 sheep from the village in the seventies and used them for a tourist crocodile zoo. If the shepherds wanted their sheep back, they had to pay almost the same price as a new one would cost. 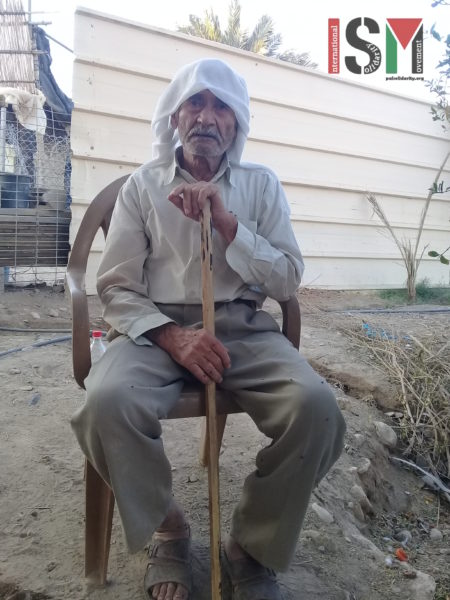 Merai has been resisting colonialism all his life

The refugee camp Abu Badjad, where Merai lived before Jiftlik, is now the illegal colony Masu’a. Neither of these families have refugee status or IDs, in spite of their expulsions. 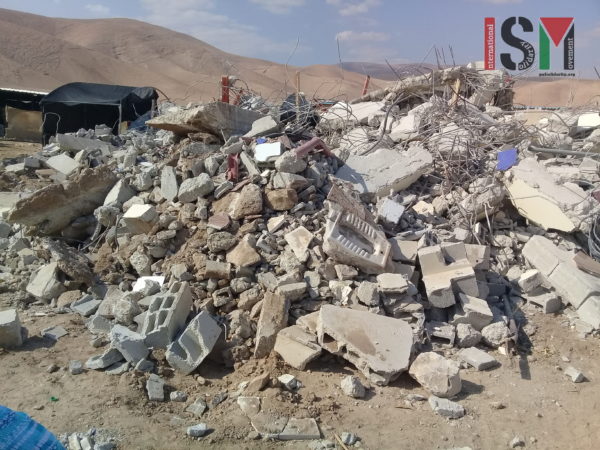 In a nearby part of Jiftlik, ISM and JVS meets another family, the family of Abu Ahram, who lost their house the same day. The homeless family has not been given a tent like the other families, and are now staying in one room. Surrounded by children, the nephew of a man who lost his house tells how they were also met by the big group of military who forced them out of their home and away from their land. The house was one of the few concrete buildings in this Bedouin community. 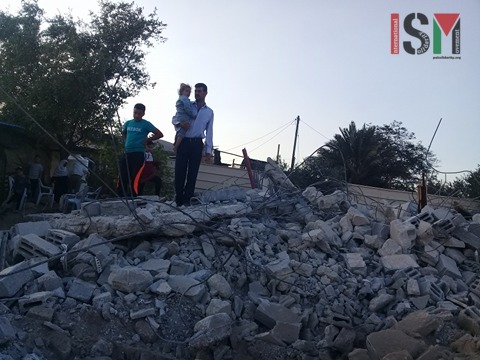 Ahmad and his kids on what used to be the sons room. 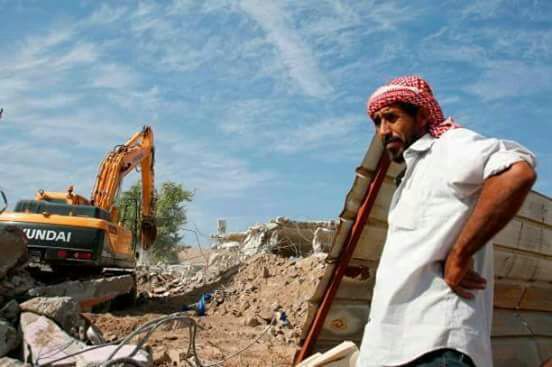 Khalil’s neighbour in front of the bulldozer.

The fourth house destroyed that day was an agricultural barn built on a water cistern. The cistern has been severely damaged and the 50 farmers using it are not sure if it is repairable. Inside the house, there were farming tools and machines, and the farmers were not allowed to rescue them from being crushed in the demolition. The cistern was built 17 years ago, and was providing the fields of beans, tomatoes, chili and cucumber with a storage of 170 m3 of water. The pool and the barn was bulit for 50 000 NIS. “This price would be the double today”, the farmer Bassil Ibrahimi tells JVS and ISM. When the demolition was being carried out, water leaked from the cistern and destroyed a one dunam field of beans. Ibrahimi also tells about how around 400 m2 of shelters for animals and machines have been destroyed between 1988 and 2000. 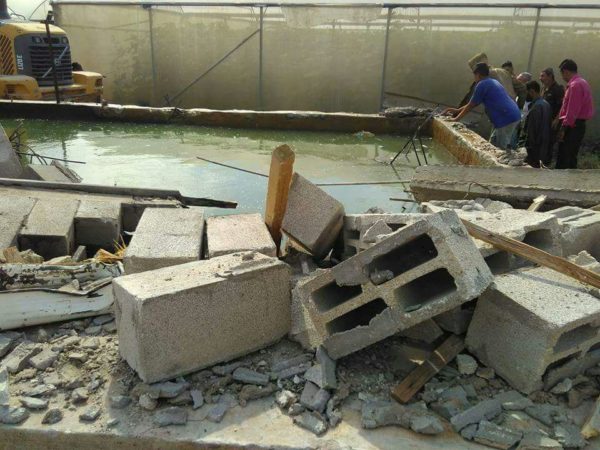 Demolitions are often carried out during the autumn and wintertime, when it is colder. Israel prohibits Palestinians from constructing any infrastructure or other development projects in the Jordan Valley, such as the reclaiming of agricultural land, opening agricultural roads or extending irrigation networks. Moreover, Israel continues to confiscate land, demolish homes and prevent rehabilitation of the existing houses and roads used by Palestinians, but maintains plans for settlement expansion and infrastructure development for Israeli settlers in the Jordan Valley. 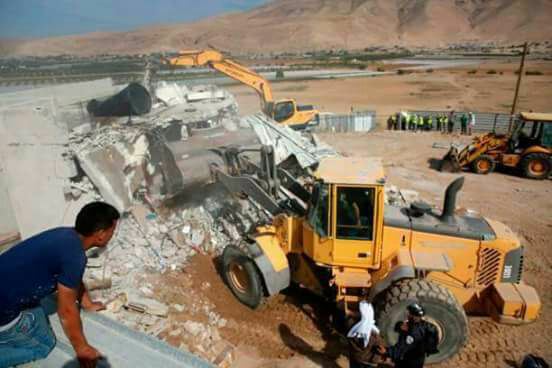 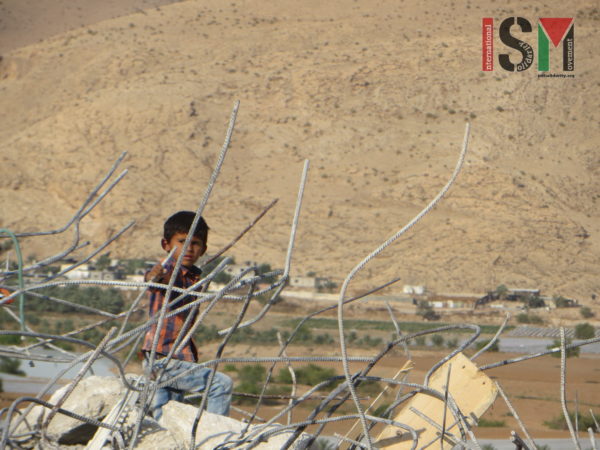 Visit the official website of the International Solidarity Movemnt (ISM).

11/28/17 Entire Bedouin Community to be Evicted in Jerusalem