There Are No Late Mornings for Samiha Ghaben 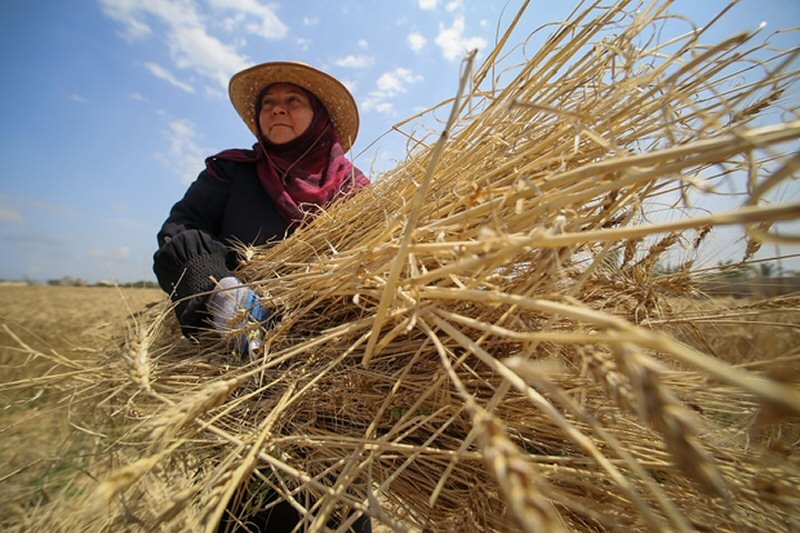 There are no late mornings for Samiha Ghaben. The 45-year-old mother of three wakes up every day at 5am to start work on her farm in the town of Beit Lahiya, northern Gaza.

By the time her female assistants arrive at 6am to take on their share of the work, Samiha has already irrigated the seasonal crops – such as lettuce, potatoes and cabbages in winter; and tomatoes, aubergines and pumpkins in summer, as well as various types of berries.

Samiha and her sister Suad inherited their farm after the death of their father 10 years ago. Samiha’s eldest daughter, Ghada, who is 16, helps her mother on the farm while her sons help their father Sobhi, sell vegetables from the family farm to shops in Beit Lahiya.

On their seven donums of land, they employ eight women to help them with the farming. Most of these women are the main breadwinners in their families, as well as skilled agricultural workers.

In a statement to MEE, the Palestinian Ministry of Agriculture said there are 66,000 farmers in the Gaza Strip, of whom 20 percent are women farmers who either own their own land or are employed by farms.

On Samiha and Suad’s farm, the women are paid an average of $6 for a seven-hour day. The low wages reflect Gaza’s harsh economy, where incomes can vary depending on the farm’s revenue.

However, the small incomes earned pale in comparison to the other risks involved in the work. These women farm in the unilateral “buffer zone”, which is imposed by Israel along its border with Gaza and includes farmland on the Gaza side.

“Every time we hear the Israeli artillery moving near the borders, we are afraid that we may be exposed to getting shot by them and we stop farming until the sounds disappear. In many cases, they shoot in the air […] We leave the farming field and we go back to our homes, so none of us get injured,” Samiha said.

According to human rights groups and Palestinian officials, farmers face shootings from Israeli forces on a daily basis.

“Farmers go to their work afraid that they might get shot by the Israeli forces,” Nizar al-Wahidi, an official at the Palestinian Ministry of Agriculture told Middle East Eye.

Earlier this month, Mohammed Atta Abdel Mawla, a 59-year-old farmer, died after being shot by Israeli forces near the Gaza border. According to the Palestinian Health Ministry, Abdel Mawla was shot in his back while working on his farm near the border. On its part, the Israeli military stated that the farmer had entered a restricted area in the southern Gaza strip.

According to a 2017 report by the Palestinian Agricultural Development Association (PARC), the Israeli occupation continues to expose Palestinian farmers in the Gaza Strip to severe danger.

The report indicated that in January and February 2017 alone 63 shootings occurred against farmers “causing more than $30,000 in losses. This included the destruction of two poultry farms and eight dunums of agricultural land to the east of the Shujaya neighbourhood.”

On 28 November 2015, Nima Najjar, 43, was shot in her left leg by Israeli forces while helping her husband on their five-donum farm in the Al-Shuka area of Rafah city, in the southern Gaza Strip.

The leg fracture completely changed Nima’s life. After undergoing surgery, she spent four months confined to her bed and has been unable to return to work. She is still reliant on painkillers.

Before the incident, Nima would help her husband Maher Najjar, 50, grow various kinds of vegetables such as tomatoes, garlic and peppers. It was work that helped them sustain their family of four daughters and two sons.

“I used to work with my husband on our land since 2007. From the beginning of the siege and the deterioration of the economic situation, he could not pay salaries for farmers’ assistance, so I started helping him. The Israeli forces keep threatening us by their shooting in the air,” Nima said.

“Now with my injury, I can no longer help my husband,” she added.

Samiha suffered grave financial loss when her water tanks were damaged by Israeli fire a couple of months ago.

“Two months ago, I faced financial losses because of the Israeli shootings that targeted water tanks in my farming field. I had to pay $400 to buy two new tanks – 1,500 litres for each – that were required for the strawberry season,” Samiha said.

“I also bear the burden of of electricity cuts. It is the thing that causes difficulties in filling the irrigation tanks. Most of the time, I stay awake until midnight waiting for electricity to fill the tanks with water that comes from the Beit Lahiya water well.”

With constant power cuts that can last for up to 20 hours, pumping water from the wells necessary for irrigation and crop production becomes a very difficult task for the farmers. They say that the water which is supplied from Beit Lahiya’s wells reaches homes only three times a week. If this is subject to further cuts, farmers like Samiha struggle to survive.

But many residents say the situation has not improved as the Palestinian factions face significant hurdles on the rocky road to reconciliation.

In the southern part of the Gaza Strip in the town of Abasan, Amal al-Qarra works on her neighbours’ land from 6am to 2pm, harvesting wheat, barley and seasonal corn every day except for Friday, her day off.

The 34-year-old mother is grateful to her father and her husband for having taught her how to cultivate land. In the 2014 Israeli war against the Gaza Strip, Qarra’s husband Mo’men, 40, sustained injuries during an Israeli air strike near their home. After shrapnel hit his spine and left hand, he was confined to a wheelchair, unable to work in his normal farming job.

Amal is well aware of the risks, but she must continue to work to provide for her three children and husband with her monthly income of $215-$273. After a long day of work, she rushes back home to take care of her family.

“I do get afraid that the Israelis will shoot us. Last January, two farmers that I work with were injured from the Israeli shooting,” she said.

According to the farmers and rights groups, the Israelis spray herbicides on Palestinian farms along the border fence from low-flying aircrafts, which damages Palestinian crops .

“I love my work. It provides me with energy. However, I encounter some difficulties due to the Israeli occupation like herbicides that are sprayed on the agricultural lands that cause the loss of many crops. And on the second day, we go to the field to take out the dead plants.”

On 7 March, the Palestinian Ministry of Agriculture accused Israel of deliberately damaging the Palestinian crops and called on human rights organisations to help end these practices.

Wael Thabet, an official at the ministry said in a statement that it is not clear what kind of chemicals are used, adding that the Israelis do not adhere to a specific schedule, making it difficult for farmers to protect their crops.

Wahidi said that the ministry has documented health problems Palestinians have suffered from because of the Israeli use of herbicides along the border. The symptoms include respiratory problems, nausea, severe skin problems and intestinal issues.

The Israeli human rights group Gisha reported that the Israeli Ministry of Defence claimed that they spray herbecides inside the Israeli territories, as part of “routine security activity”.

For nine days, Khadija Asfour was not able to go to her job on a farm in Juhor al-Deek, southeast of Gaza city, after the Israelis had sprayed herbicides on the farmland. She said that all the crops were damaged from the toxins.

“I have been working as a farmer for 15 years. I am sad that I did not go for work for nine days. Hopefully, I can go back again after the herbicides’ effects disappear,” she said.

With her $7 daily wage, Asfour, 50, is the main breadwinner in her family because her husband, Bashir, 57, is an unemployed builder.

She has many bills to cover, with two of her daughters at university and another daughter who has been physically disabled since birth.

“In the mid-1970s and 1980s, the agricultural sector contributed to 30 percent of the GDP in Palestine. It employed a number of workers in agriculture, and before 2000, it included 13 percent of the unemployed,” Ziadah said.

Despite the challenging circumstances, the women farmers remain strong and continue to work under very risky conditions.

“According to history, most Palestinians worked as farmers. Our family, Ghaben, originates in Jaffa. Our grandfathers were farmers, so we pay attention to preserving our heritage through keeping our original agricultural careers, and we hire women to work with us. However, the Israeli occupation does constitute a danger for us,” Suad said.