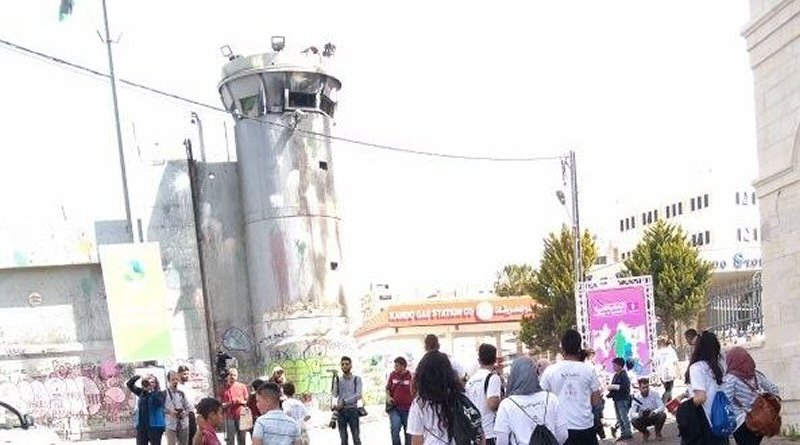 The marathon, which took place in front of the Church of the Nativity, in the city of Bethlehem, was attended by about 7,000 runner  contestants from 72 countries, in races including 42 km, 21 km, 10 km and 5 km for families.

These are the most prominent results of the marathon:

First: Yuri Plagodir of Ukraine and end distance in two hours, 45 and 56 seconds.

Second: Anthony Saakot of France and end the distance in three hours and 48 seconds.

Third: Musina Romain of France and end distance in three hours and 15 minutes and 23 seconds.

First: Annes Quiminer of France and end distance in three hours and 15 minutes and 12 seconds.

Second: Jessica Anderson of Britain and end distance in three hours and 27 minutes and 13 seconds.

Third: Sisley Goth of Denmark and end distance in three hours and 40 minutes and 35 seconds.

First: Pavel Klein of Ukraine and end distance in an hour, 19 minutes and 23 seconds.

Second: Mads Scanking from Denmark and end distance in an hour and 19 minutes and 11 seconds.

First: Eva Otti of Austria and end distance in an hour and 19 minutes and 23 seconds.

Second: Julia Daitlova of Ukraine end distance in an hour and 30 minutes.

Third: Samah Hamida from Palestine end distance in an hour, 38 minutes and 28 seconds.

The Marathon started at the Church of the Nativity, in the center of the Old City of Bethlehem, and in the attendance of Bethlehem Governor Jibrin al-Bakri, Secretary-General of the Higher Council for Youth and Sports, Issam Qadumi, and Bethlehem Mayor Anton Salman.

The marathon’s course took athletes through a different view on Palestinian everyday life, including a few steep hills and with some fast sections. It started at the Church of Nativity, taking the runners through the city, the two refugee camps of Aida and Dheisheh, and along the Israeli apartheid wall, deemed illegal by the International Court of Justice in 2004.

Athletes raced as they were Palestine flags and signs reading “#TimesUp to free Ahed Tamimi and all Palestinian children”, “Long live Palestine” and “Jerusalem is ours”.

They are expected to receive a unique medal crafted from local Palestinian olive tree wood and a diploma certificate.

Al-Bakri said the marathon sent the message that asserts the Palestinian people’s right to freedom of movement and the right to establish the independent state, with East Jerusalem as its capital.

Among the racers was the 2017 Arab Idol competition winner Yacoup Shaheen, a resident of the city, who asserted that the presence of thousands of athletes sent the message that freedom of movement was a legitimate right for Palestinians.

Police closed several roads in Bethlehem, to ensure free movement for the athletes. The Palestinian Red Crescent provided a mobile clinic at the start/finish area and ambulances along the route.

The Palestine Olympic Committee, which sponsored the event, said that the marathon was designed to “increase world awareness of matters, such as the restrictions that Palestinians face on a daily basis because of the occupation. The event provides all participating foreigners with insight of the fruitful Palestinian culture that is not widely known across the world.”

Israel prevented the participation of Palestinian athletes from Gaza in the sports event.

Israeli forces still impose severe restrictions on Palestinians’ freedom of movement across the West Bank, through a complex combination of fixed and flying checkpoints, settler-only by-pass roads and various other physical obstructions.

Israel has imposed a blockade on the Gaza Strip and, subsequently, tightened restrictions on Palestinians travelling in and out of Gaza after Hamas came to power in 2006.

The West Bank, of which East Jerusalem forms an integral part, along with the Gaza Strip, form the internationally recognized Palestinian territories that Israel has occupied since June of 1967.